It was a typical traditional home layout: An entryway led to stacked living and dining rooms on one side and a galley kitchen and breakfast nook at the back. The owners of this 1940s north Toronto home intended to leave the former intact when adding a back extension that would accommodate an open-concept kitchen and family room. That is, until designer Cameron MacNeil arrived.

Having transformed two of the homeowners’ former properties, Cameron signed on to design the 300-square-foot addition and knew he wanted to rejig the plan from the get-go. Knowing that proper living rooms are so rarely used, Cameron campaigned to nix the room entirely and instead transform it into a formal dining room at the front of the house. He added a petite powder room (the first floor was previously devoid of one) and opened up the rest of the main floor to accommodate an even larger kitchen-slash-family room. 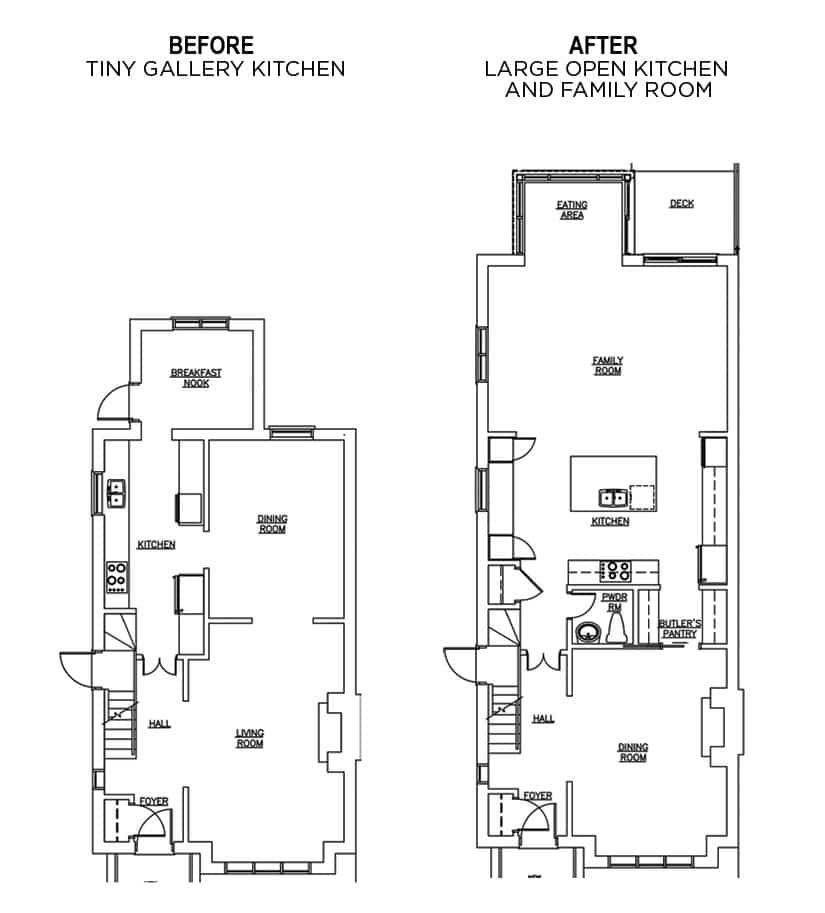 After all, these homeowners – who are avid cooks and love hosting dinner parties – planned to use the kitchen. A lot. And a large space was essential to accommodate all their desired features: two ovens, a butler’s pantry and a show-stopping seven-foot waterfall-edged-quartz island. (There are hidden six-inch-deep cupboards on the side with the stools – perfect for storing lesser-used items – and a built-in garbage disposal and dishwasher on the other.)

But among these splurges – including chef-worthy appliances – there is modesty in the clean, pared-back design and budget-friendly elements, such as the vinyl wallpaper backsplash used on the side walls. “I love its subtle grasscloth-like texture,” says Cameron. “Plus, it’s wipeable and can be easily changed.”

Such practicality in no way hindered the space’s charm. “The home has a classic aesthetic, and I wanted the kitchen to reference that but feel contemporary at the same time,” says the designer, who aptly chose custom-stained white oak floors and a soft grey palette as the envelope.

“It’s a joy to cook here and have guests gather at the island for cocktails and conversation,” says one of the homeowners. “And whether or not we’re cooking and entertaining, just being in our kitchen is a real treat.” 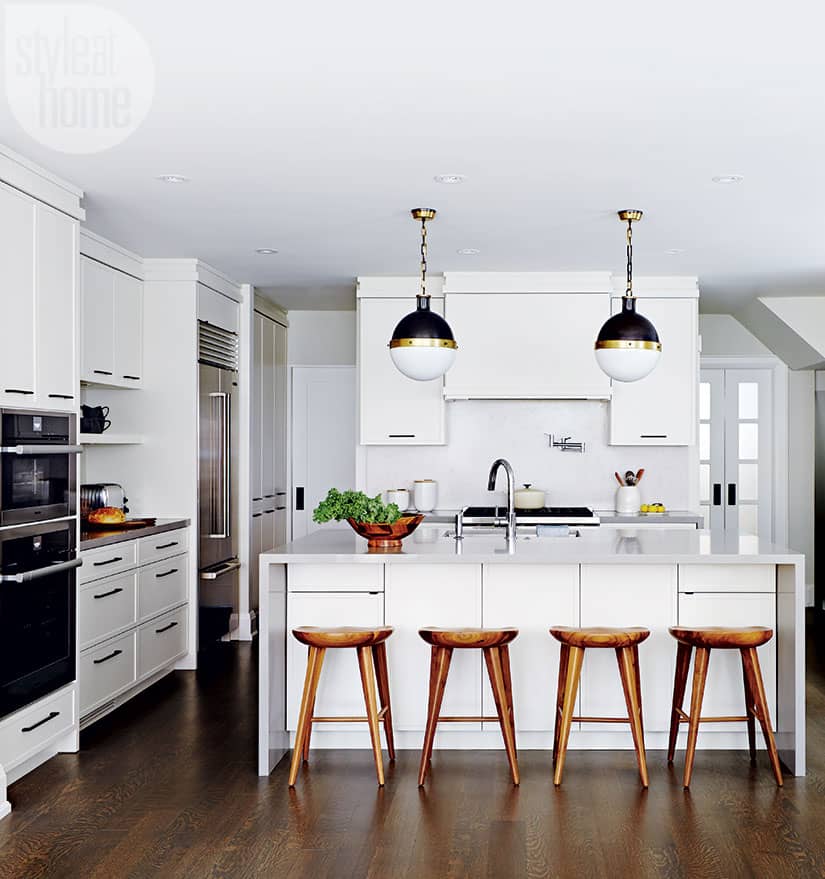 The kitchen’s simple yet elegant look belies its powerhouse punch. “It has everything we need,” says one of the owners of this Toronto home, “including a built-in TV and sound system, a 36-inch six-burner range with a pot filler and two ovens – even a steam one.” 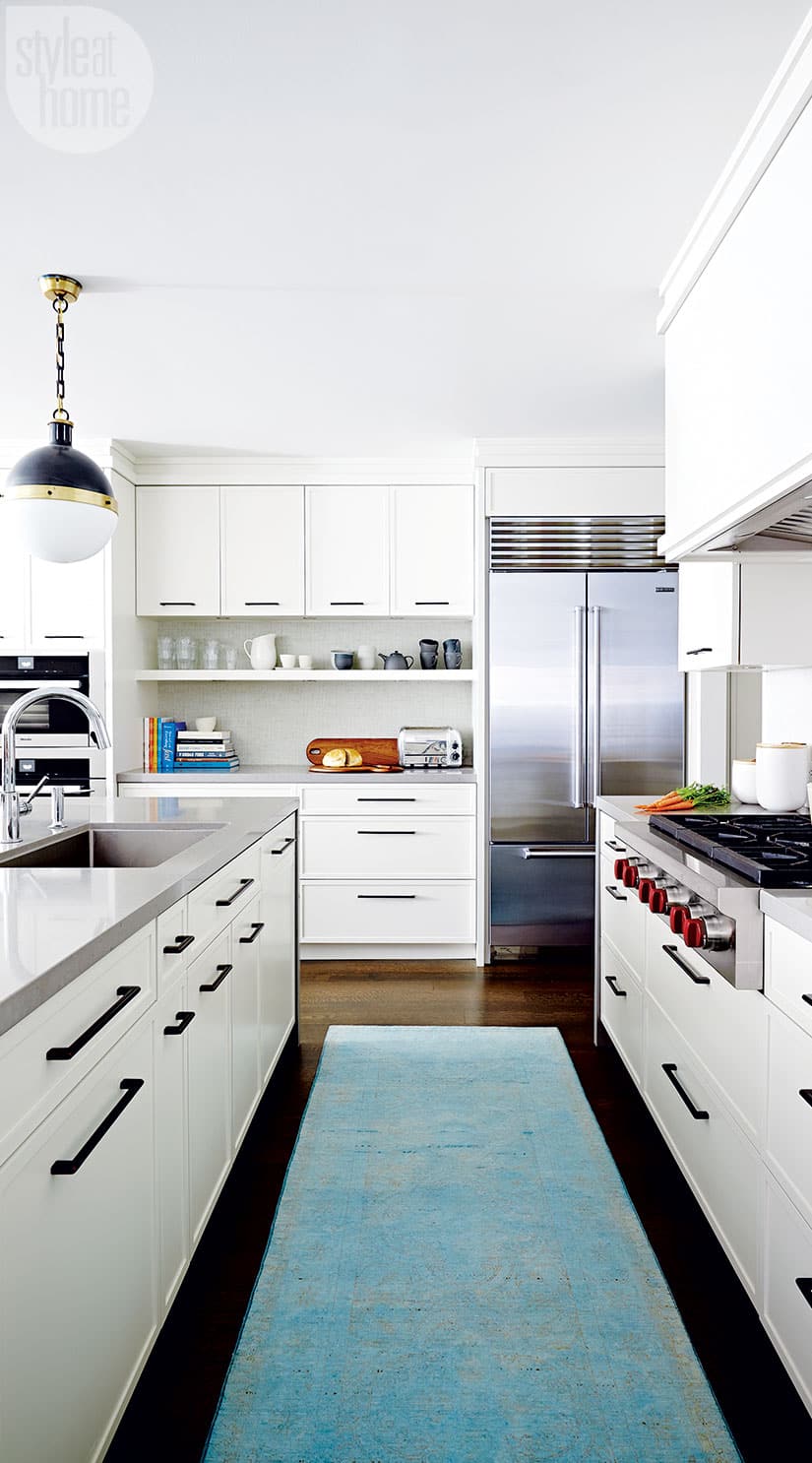 The fridge was the only piece of the reno that didn’t go according to the original plan: Pre-construction, designer Cameron MacNeil suggested changing the fridge from a model with one large door to a French door option. “Its door swing takes up less space,” he explains. 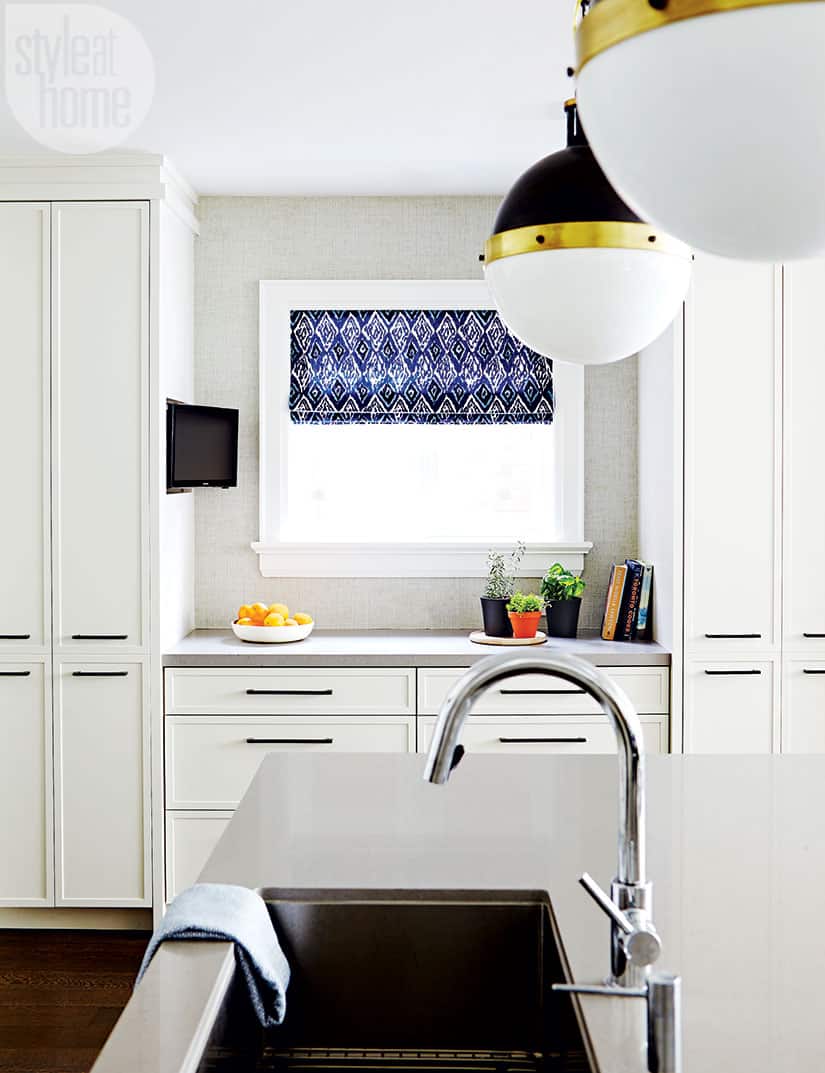 Tucked into a corner of the kitchen, a TV is accessible without being too noticeable thanks to the eye-catching Roman shade fabric next to it. “The TV was positioned so we could watch the morning news while having coffee at the island,” says one of the homeowners. “It swivels out then ‘disappears’ back into the niche when not being used.” 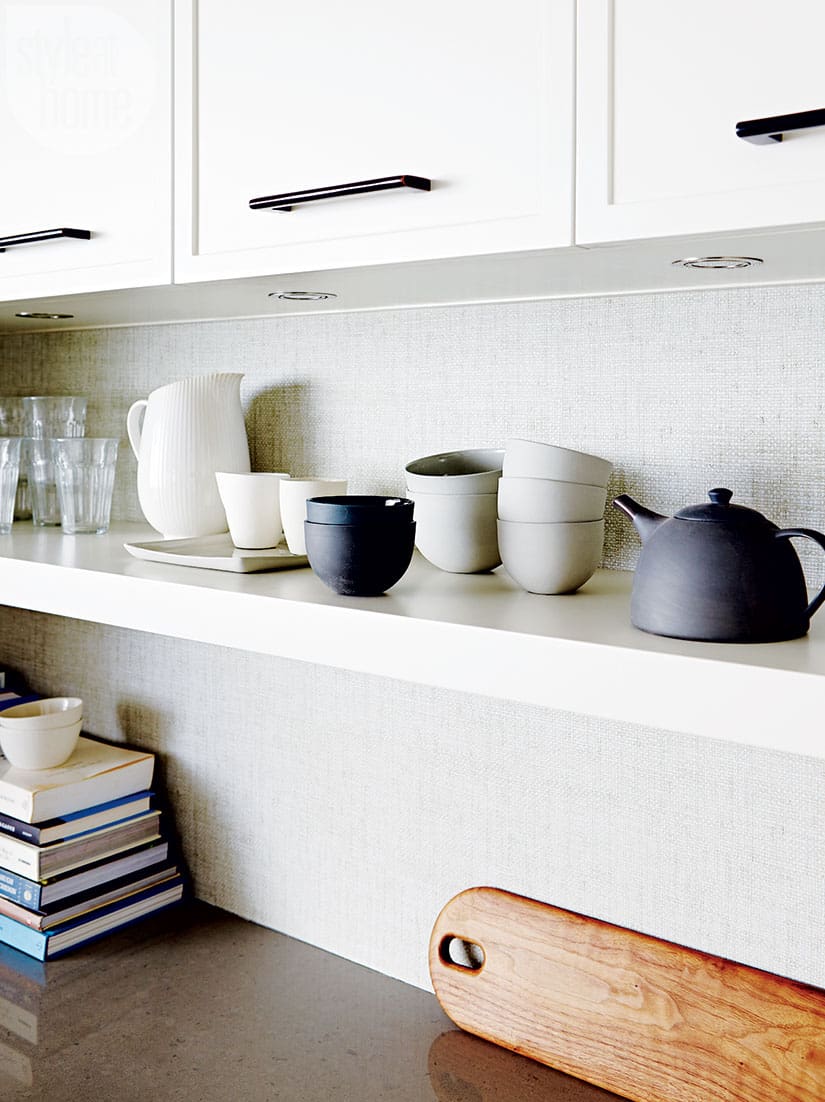 Wooden stools and hardwood floors warm up this sleek white and grey space. 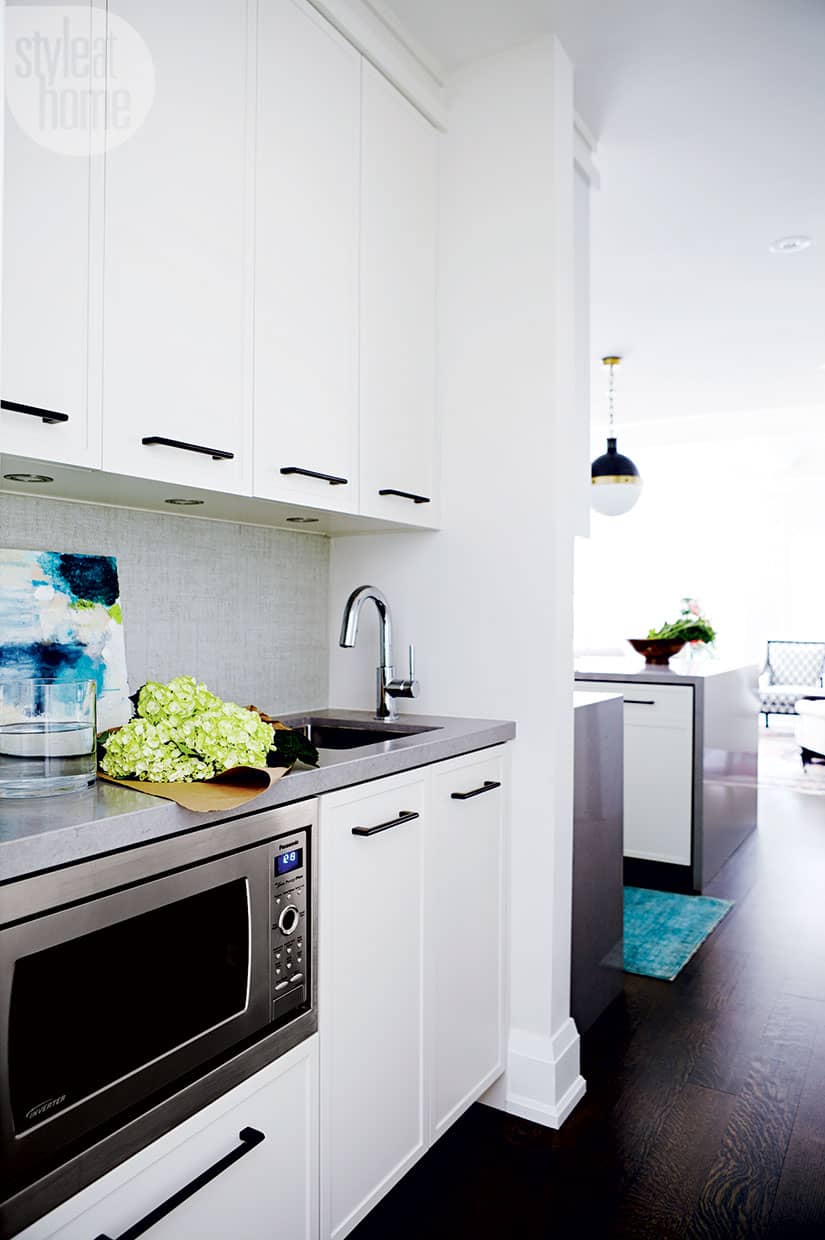 “This pantry leads to the dining room, and is super convenient – we use it every day,” says one of the homeowners. Though shallow, it features ample storage space, a microwave and a sink. “Plus, when we have a dinner party, dishes can sit here out of sight so the kitchen stays clutter-free,” she adds.

This reno just goes to show: Mixing form and function is always the recipe for success.

How a home layout was rejigged to create a spacious kitchen