A family home with traditional bones is decorated with a clever mix of styles and lively hues.

When Robert and Lesley Cancelli moved into their 4,200-square-foot uptown Toronto home, they loved its traditional centre-hall plan and classic architectural details. The previous homeowners had left it in good shape with some thoughtful renovations, but the Cancelli family (with kids aged four, seven and 10) sought an even more updated, youthful vibe and hired designer Stephanie Lees to achieve it. “The house has good bones and didn’t need a lot of renovations,” Stephanie explains, “but it required some modernizing, including painting and redecorating.”

To achieve a family-friendly yet elegant design, Stephanie introduced some custom pieces to suit the traditional space’s more formal dining and living rooms. While Robert and Lesley brought in the dark wood table from their previous home, new dining chairs and a sleek custom-made sideboard balance the old with the new. In the living room, a pair of pretty vintage chairs was refinished and reupholstered, and new armchairs and a sofa with simple clean lines were added to complete the room.

Stephanie is especially adept at helping her clients with art selection. “We chose pieces that work in the new spaces but also have significance for the family and their lives together,” she says. Lesley and Robert met while they were both living and working in New York City, so several pieces give a nod to that time in their lives. “We also love boating and cottage living,” Lesley says. “A lot of our artwork has a connection to that lifestyle, too.”

Now the home is a sophisticated mix of vintage, new and custom pieces that are at once formal, casual and fun. It all adds up to a traditional house with a playful twist for this lively family. 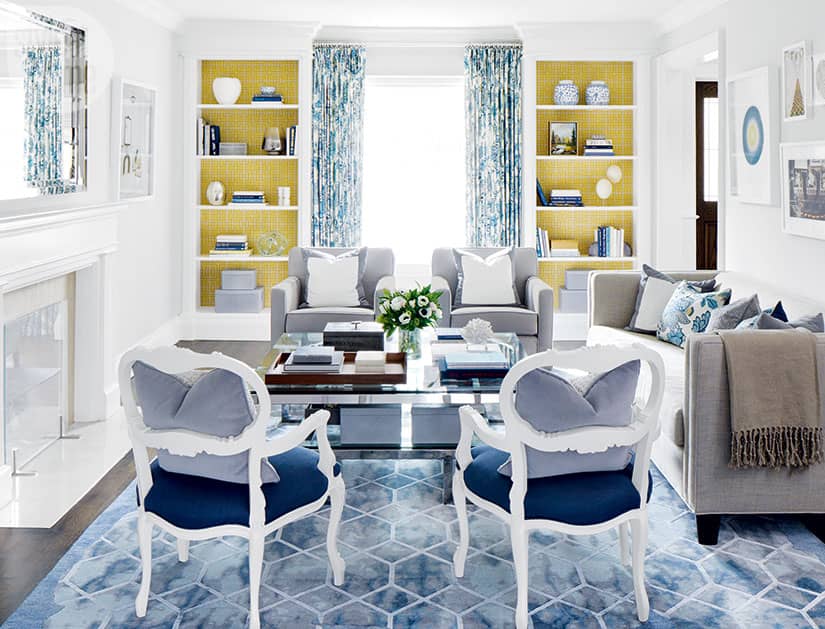 The pair of vintage armchairs in the living room came from homeowners Lesley and Robert Cancelli’s previous house, but designer Stephanie Lees had their frames painted a pale grey and their seat cushions upholstered in a rich blue linen. Yellow fabric backing the built-in shelves, floral drapery and a geometric rug enliven the room with colourful pattern. 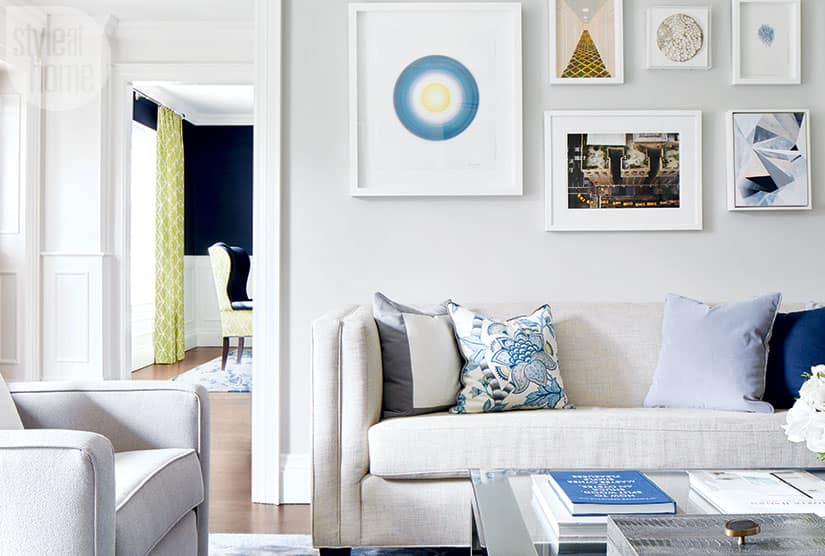 Much of Lesley and Rob­ert’s art collection was selected for its connection to a time, place or pastime that is important to the couple. Stephanie stuck with soft neutrals on the large upholstered furniture and then brought in punches of fresh colour and pattern in the accessories. 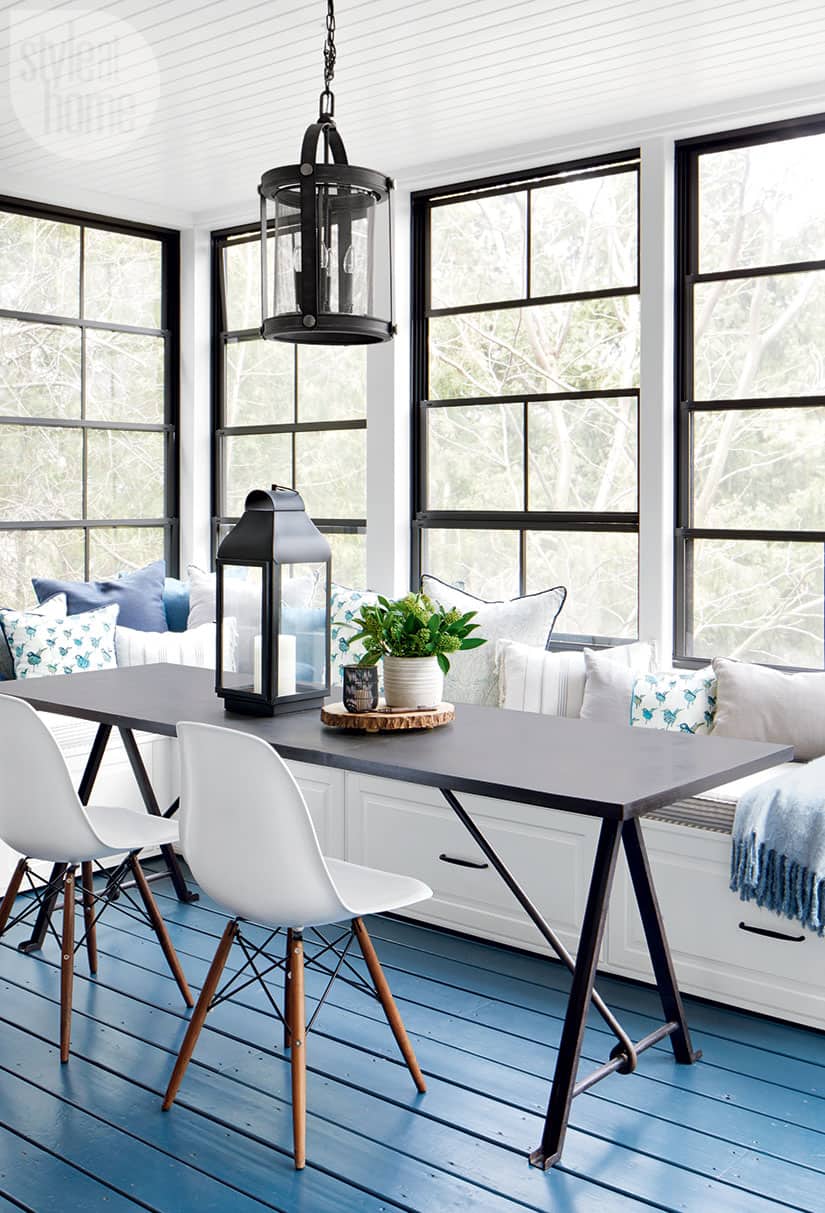 Just off the kitchen, the three-season Muskoka room was all cedar when the family moved in. “We debated keeping the natural wood, but brightening it up won out,” says Stephanie. “It’s very much a cottage-inspired space.” The blue accents from elsewhere in the house are carried through here as well, most notably in the bright painted floor. 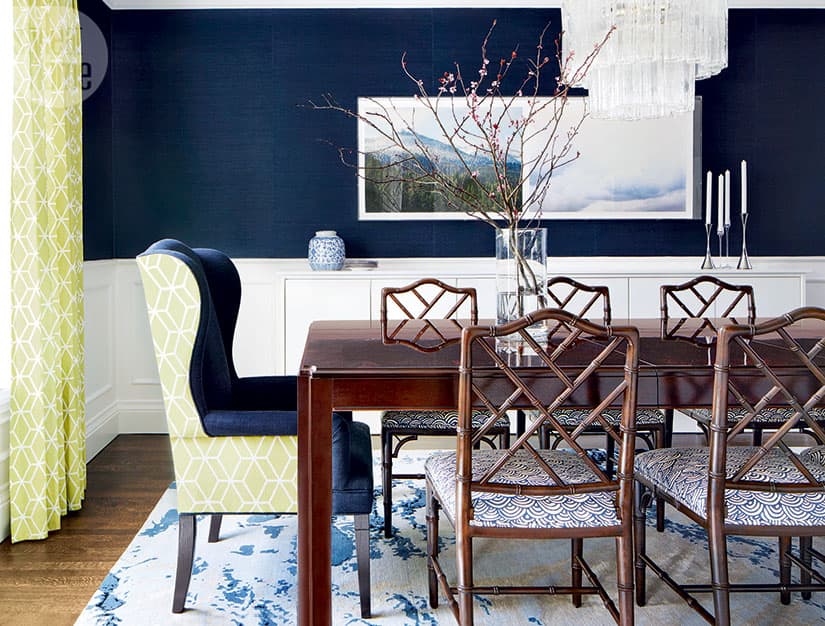 The custom bamboo chairs in the dining room were modelled on ones from Lesley’s grandmother’s house. “She had great style, so I love having things that remind me of her,” she says. Fun fabrics lend a note of playfulness to the more formal furnishings. Navy grasscloth on the walls and a vintage Italian chandelier add drama. 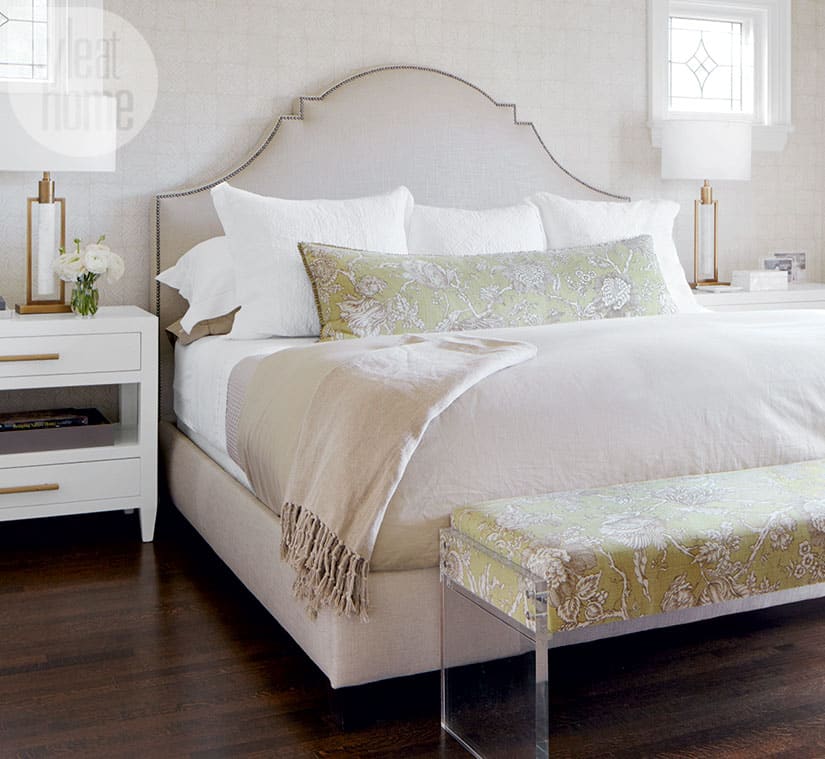 Lesley and Robert wanted their bedroom to feel like a peaceful refuge from busy family life. Its serene neutral palette was inspired by the natural stone used in the adjoining ensuite.

A classic home accented with cheerful colours and thoughtful artwork