In this bright and beachy Vancouver home, a kitchen island serves as a warm, welcoming destination in a sea of open space.

Spring arrives in East Vancouver in a canopy of pink. Cherry tree branches are covered in blush-hued blossoms, bobbing and heavy from spring showers, while hazy willows and whispering pastels offer a scene as pretty as a watercolour painting. “After months of gloomy rainy days, our neighbourhood comes alive in April,” says Kelly DeVisser, who lives here with her husband, Dave, and their two young daughters. One of the highlights of this time of year is that the local farmers’ market finally starts up. “Weekend walks to buy seasonal produce have become a family tradition,” says Kelly. “We love to cook together.” In fact, the girls, aged six and three, are already culinary enthusiasts.

Kelly and Dave are quick to credit all this home-cook revelry to their spectacular family-friendly kitchen – and to interior designer Peter Wilds, who redid their 2,760-square-foot four-bedroom 1913 house in 2016. When he first came to see the home, it featured a dark and narrow galley kitchen that felt closed-off from the rest of the house, which was broken up into a series of smaller rooms. Peter and the homeowners envisioned an open space with a sparkling kitchen as its focal point – and so the kitchen is precisely where he began. After the main floor was gutted and its walls knocked down, the home’s pièce de résistance was installed: a whopping 10-by-five-foot custom island. “A monolith,” says the designer.

From day one, Kelly and Dave trusted Peter. They didn’t bat an eye when he suggested installing such a large kitchen island, but they did hesitate – just a bit – when he wanted to eliminate two windows to make room for a wall of chef-calibre appliances. The couple also worried that Peter’s plan to use mixed metals would end up too glitzy. “But we knew he had a vision,” says Dave, “and we believed in it.”

And thank goodness they did! Satin brass hardware now offsets function-forward stainless steel appliances befitting this foodie family, and a dance of geometric lighting illuminates the oversized island. The couple couldn’t be happier with the results. “The kitchen just glows,” says Kelly.

In this open concept home, the living and dining areas serve as seamless extensions of the standout kitchen – and while the kitchen demonstrates some design indulgence, these spaces illustrate Peter’s artistic restraint. “I start a project by stepping back to see what’s already working,” explains the designer. He chose to simply enhance the gracious dining table and chairs the homeowners already owned with a custom banquette topped with toss cushions fashioned from Kelly’s collection of vintage Chinese textiles. Similarly, in the living area, Peter retained the existing sectional the family had long adored, but he rounded out the space with a perfect play of toss cushions, artwork, a side table and other accessories. He also visually expanded the space with a towering mirror framed in custom millwork.

“Good design is all about listening,” says Peter. “The days of design for its own sake are over. A beautiful space is born of filling it with what speaks to you, in creating rooms that let you live your life – your way.” And when that’s using your expansive island to teach your kids how to bake scones and cookies, we totally agree. 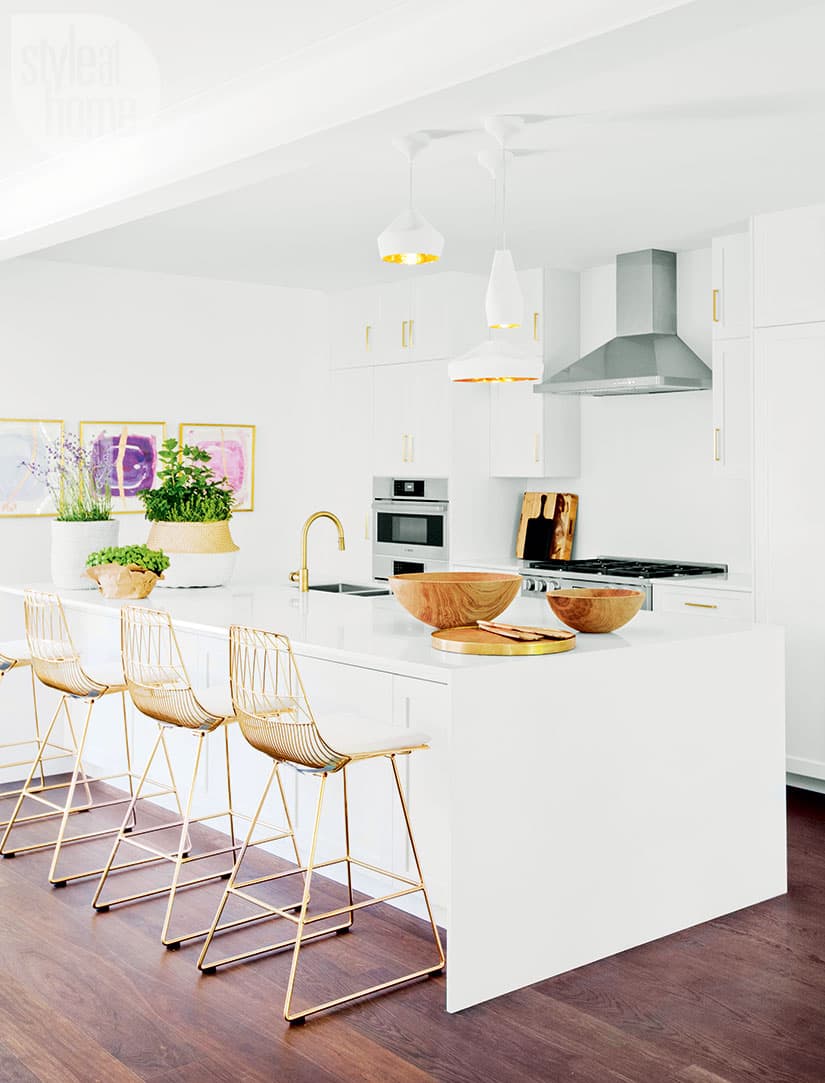 The dining table of this Vancouver home looks onto a lovely island – the kitchen kind. Gold glimmers from the sleek angular bar stools, hardware and lighting. Featuring a 36-inch range, two dishwashers, a steam oven, a slim wine fridge and a recycling centre, the space is fully stacked with chef-worthy apparatus, yet you’d never know it thanks to the Shaker-style panels that allow the appliances to blend right in. 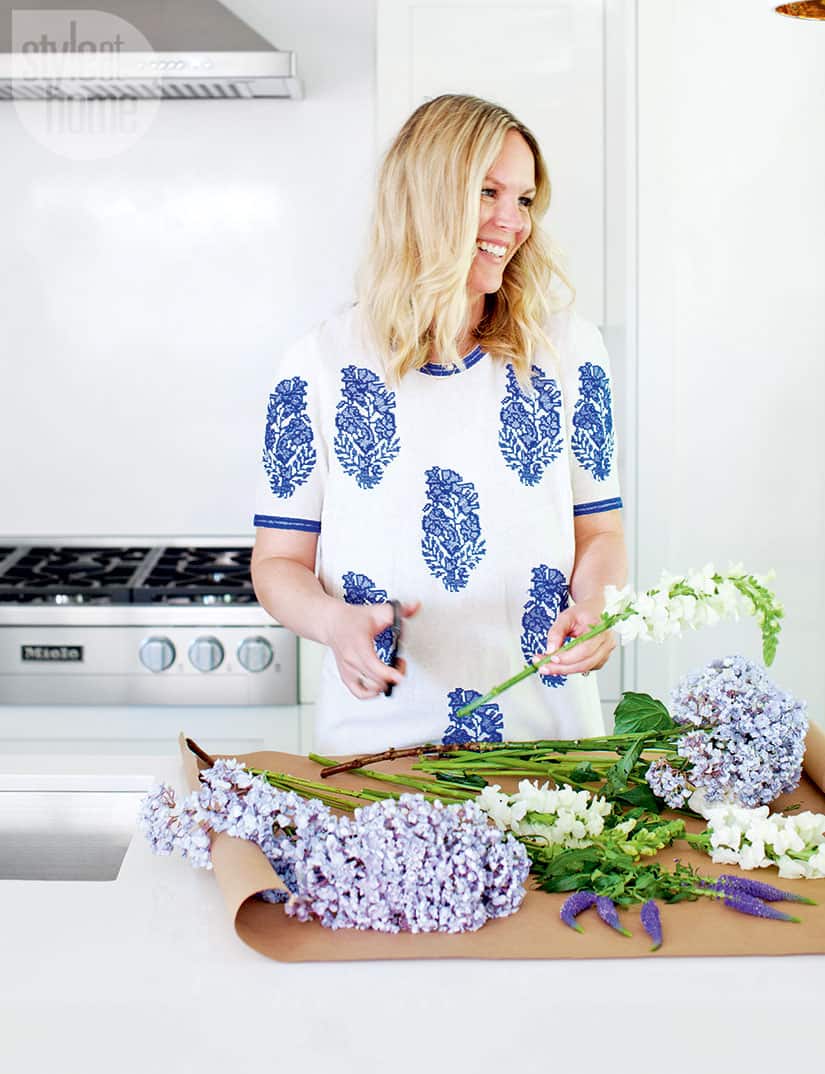 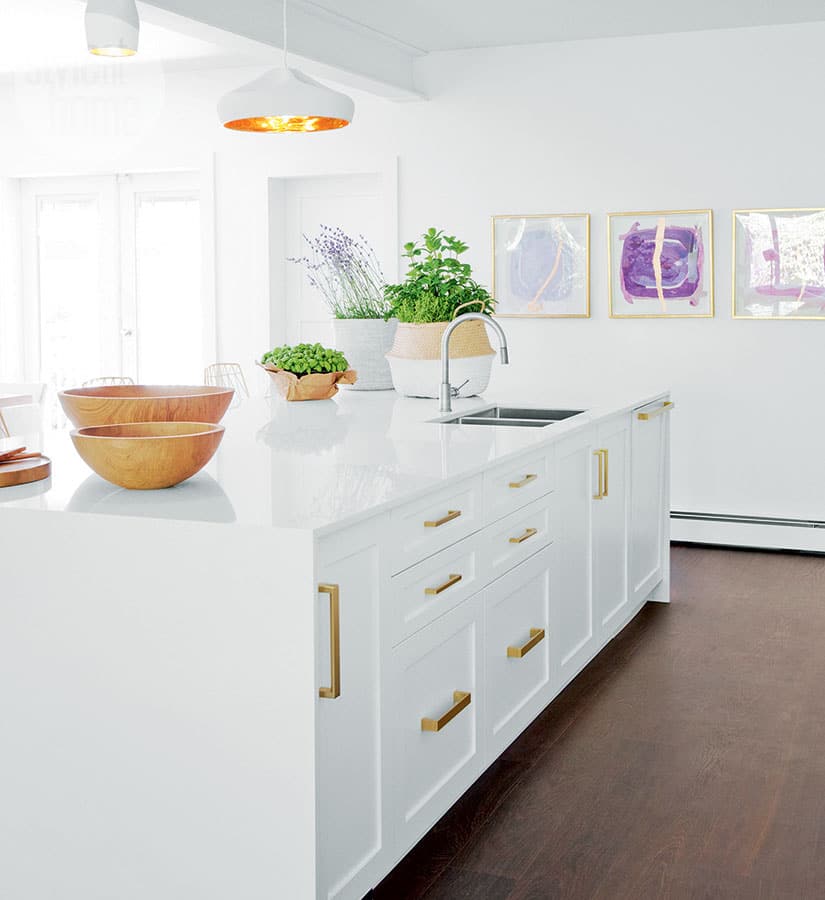 “I requested lots of storage,” says homeowner Kelly DeVisser, noting that the large cabinets and shelving even provide room for her daughters’ crafting supplies. The space between the island and appliance wall is extra wide so this whole foodie family can comfortably cook and hang together here. 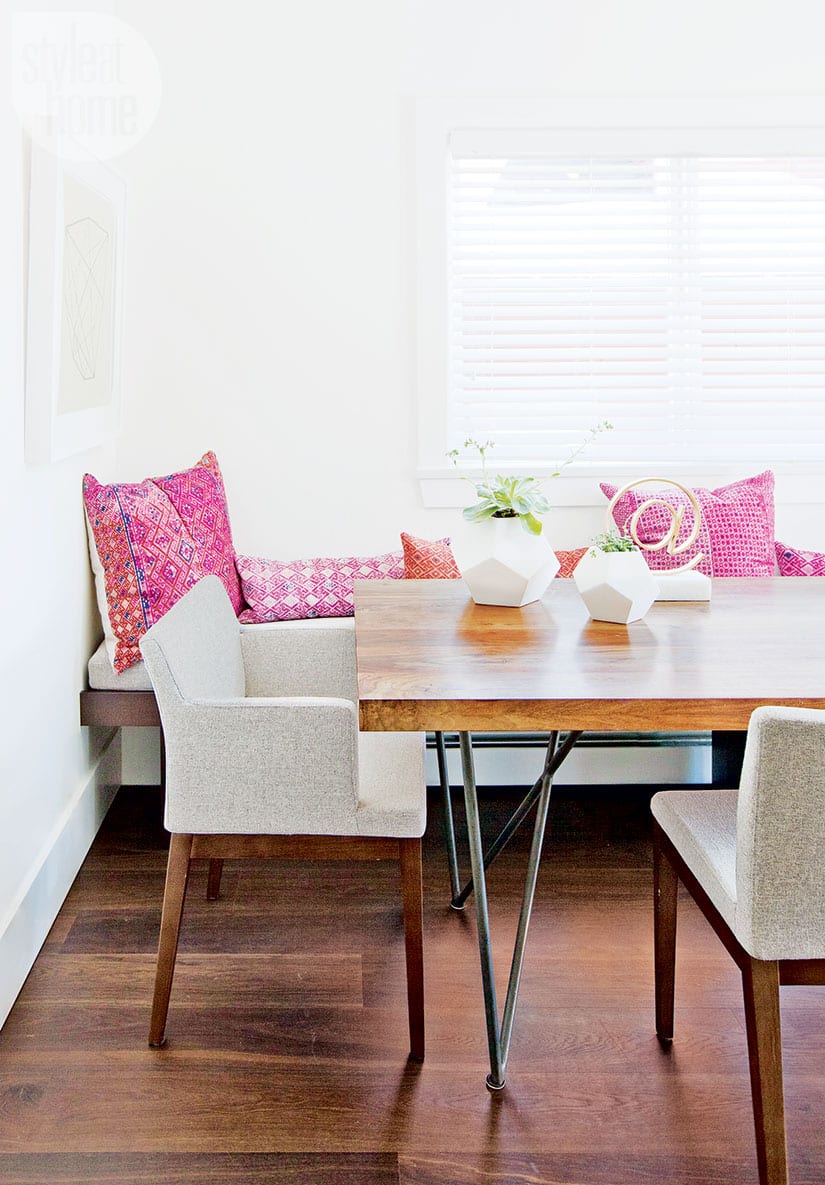 The toss cushions cleverly fashioned from Kelly’s collection of vintage hand-embroidered Chinese textiles lend the dining room a fresh eclectic vibe. “This area is so cozy when it’s just us, but we can fit up to 10 people here without feeling cramped,” says Kelly. 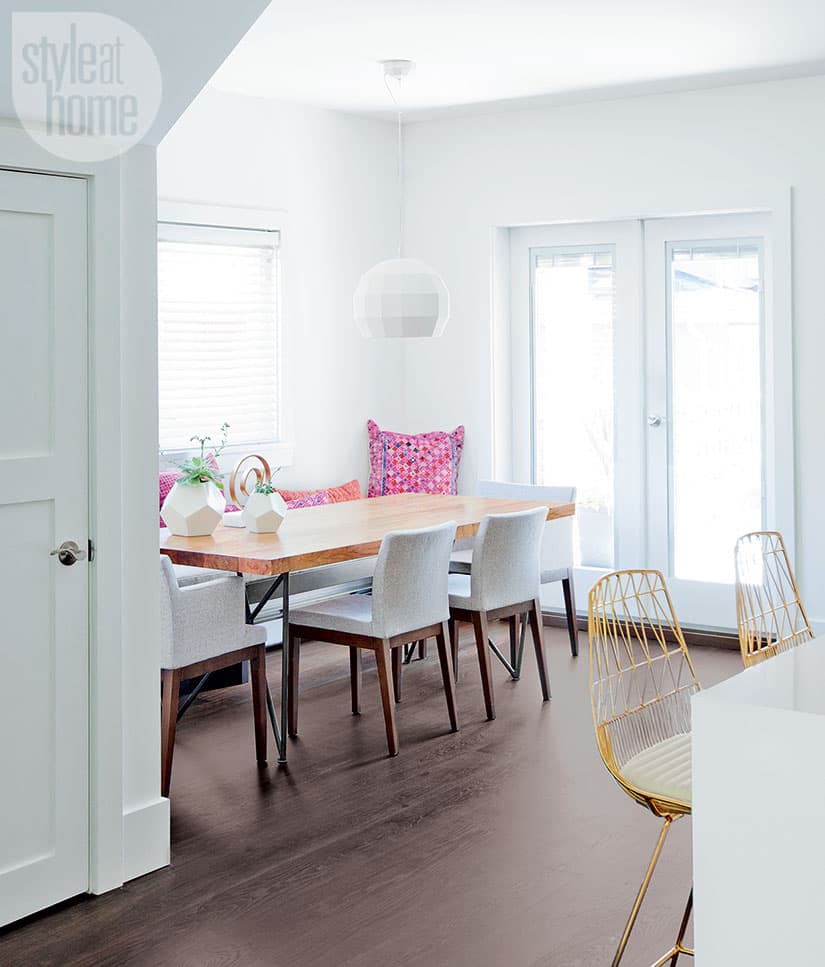 The open kitchen and dining area is a dramatic departure from its original state. Before the renovation, there was a partial wall between these two spaces. Interior designer Peter Wilds opened up the space, knocking down the wall and replacing the single French door that led to the deck with two modern glass ones, which suit the scale of the large island. Now, natural light spills into the room and across all of its surfaces, including the handsome wide-plank engineered wood floors. 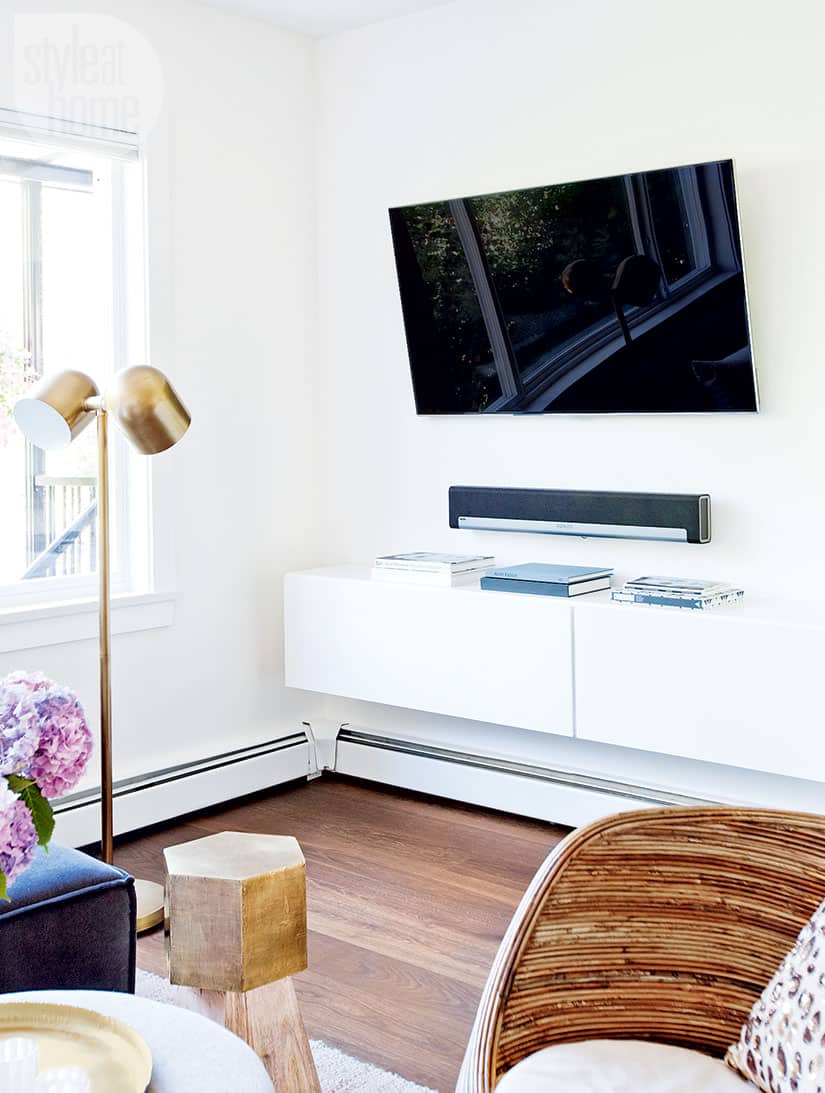 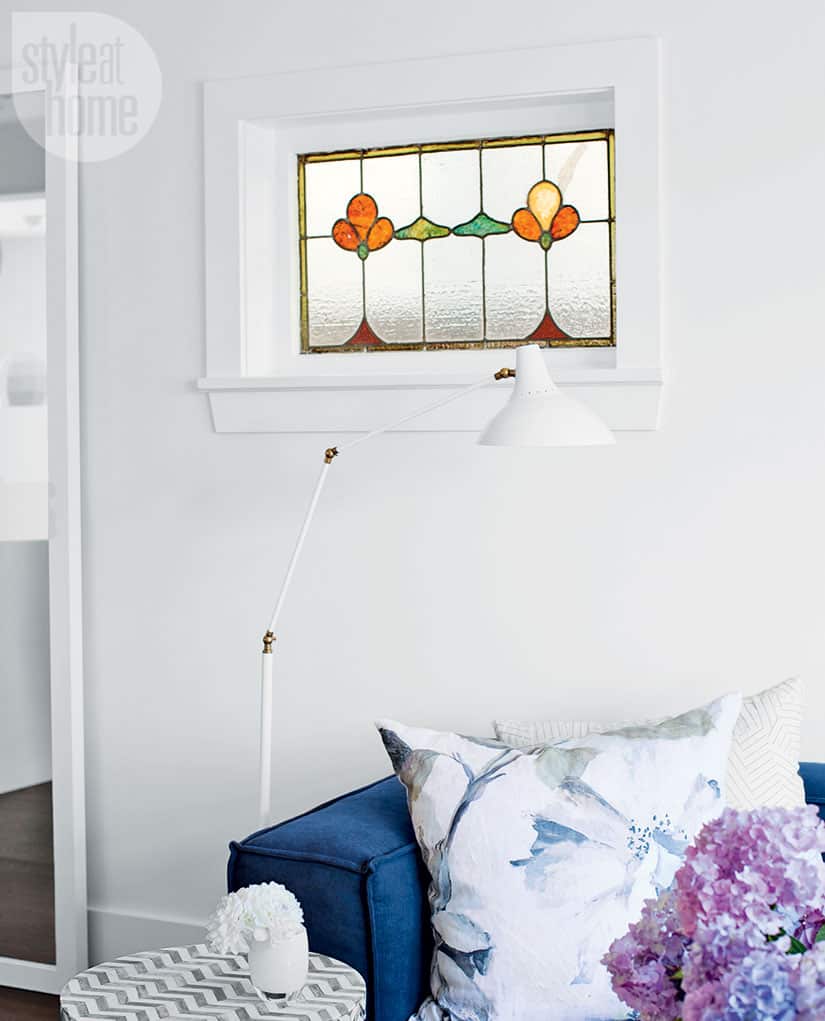 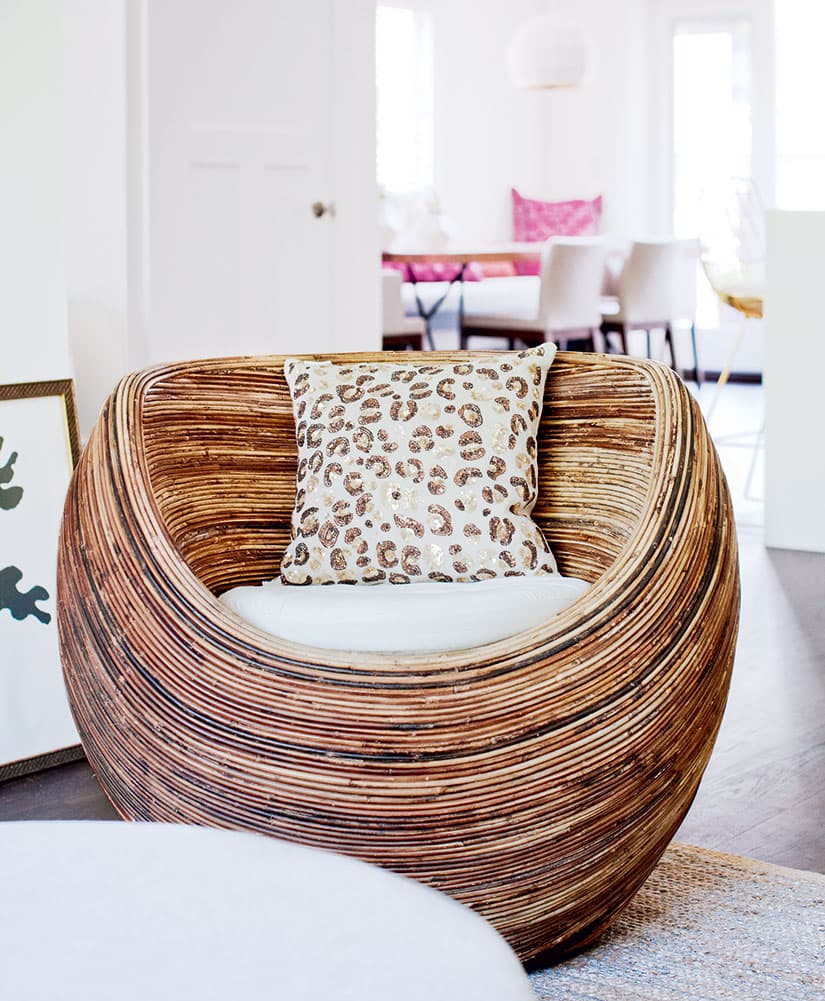 The console nestled below the TV is one of the few furnishings purchased during the redesign; Peter otherwise worked with the beautiful pieces the homeowners already had. Simple, clean-lined and floating, it takes up little visual space in this intimate living area. The swooping wooden club chair offers sculptural eye candy, and the original stained glass window highlights the home’s heritage. 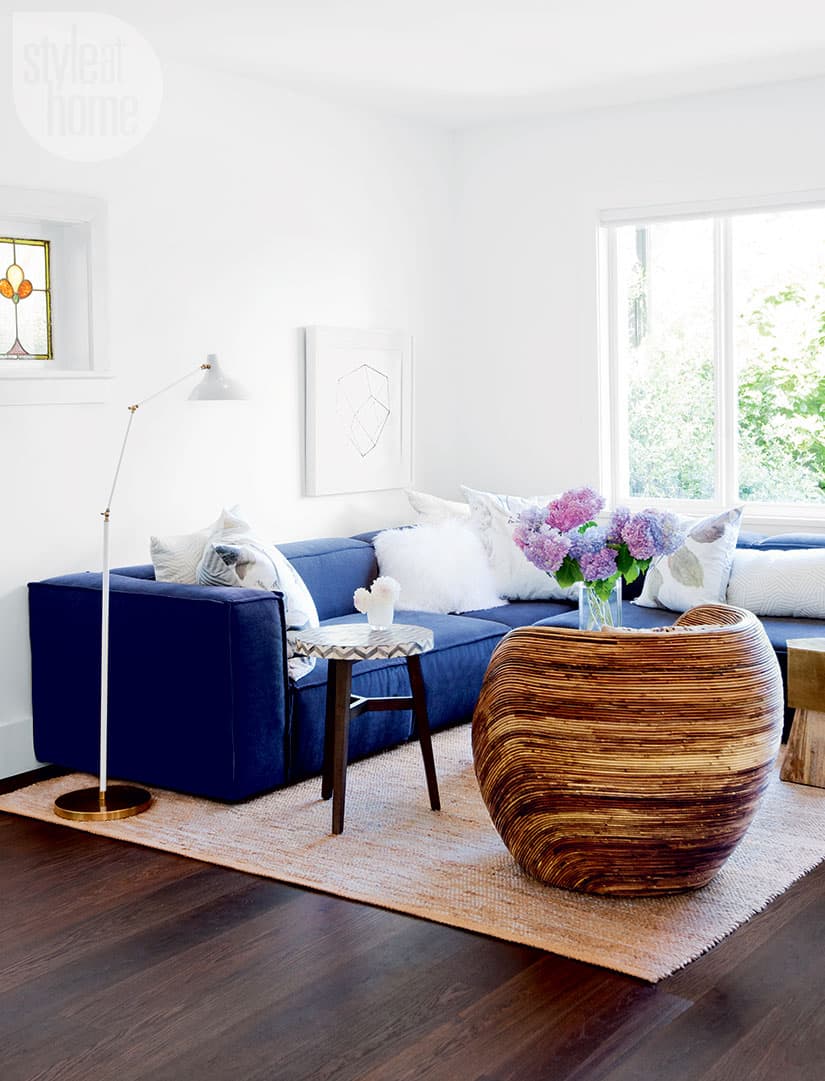 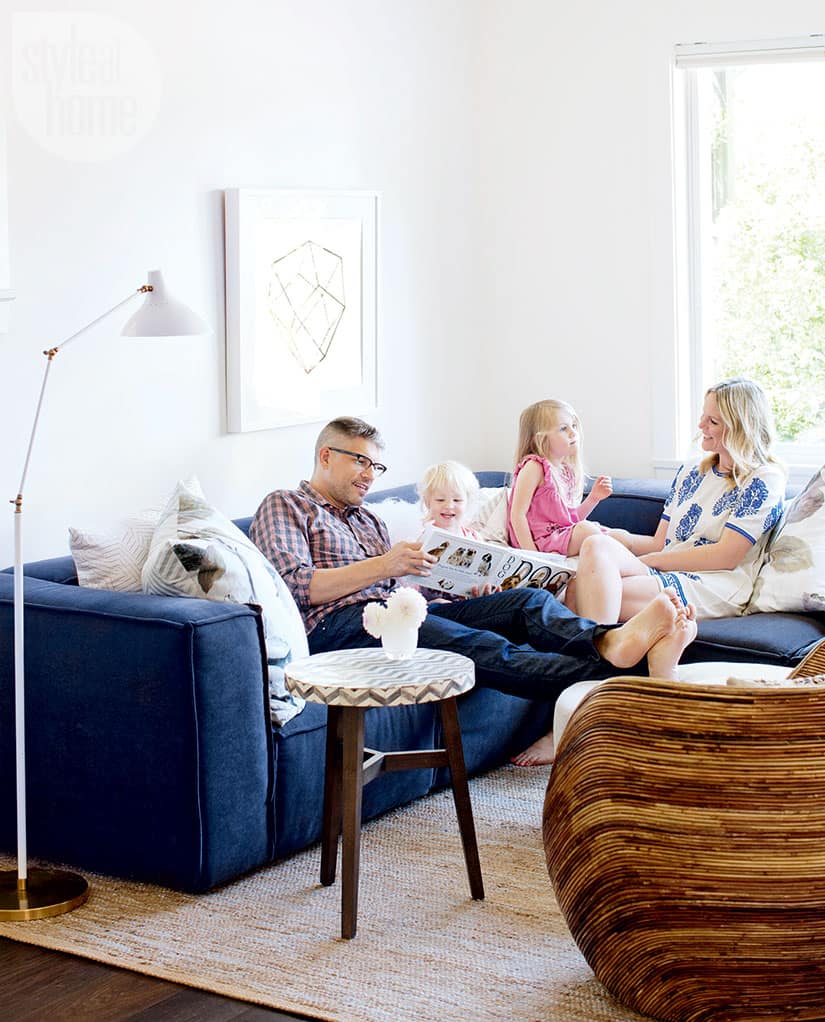 The homeowners adored their low-slung sectional and deep comfy club chair, so Peter simply layered in functional flourishes through lamps, textured and patterned toss cushions and a custom upholstered ottoman. The side tables are all within reach of the seating. “Nobody should ever have to get up to put a glass down or use the floor as a table,” says Peter. 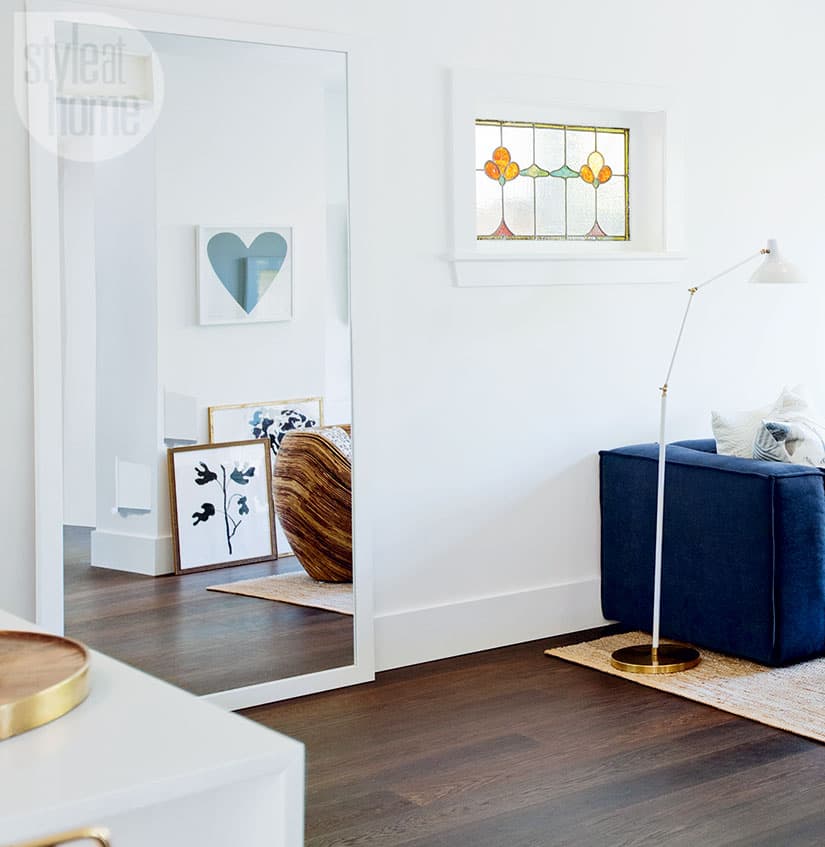 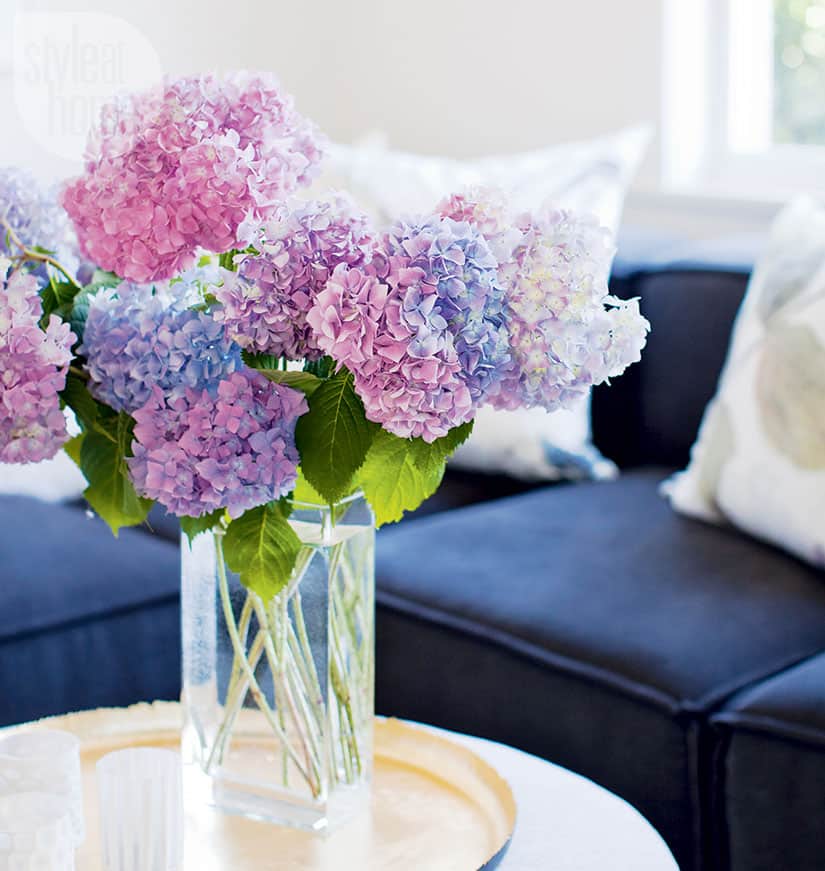 “This simple oversized mirror bridges the living and kitchen areas and visually expands the space,” says Peter. “It bounces light, acting almost like a window.”