Look inside this cool contemporary family home set on a sprawling lot in North Vancouver.

You wouldn't expect this urban-chic house to have a chicken coop in the backyard. But that’s exactly the type of lifestyle these homeowners envisioned when they came across this North Vancouver property two years ago. “It’s on a quarter-acre lot in a part of town where there usually aren’t parcels of this size," says the homeowner.

The house itself, which was initially being constructed as a spec, was in the framing stage when the owners purchased it. They took over the design to create a stylish 4,800-square-foot home suitable for their active family, which includes three young children and two pets – not to mention six chickens.

Along with taking advantage of the substantially sized lot, the homeowner wanted a personality-packed interior. This meant collaborating with designer Joanna Vagelatos of JV Design Group, with whom she’s worked several times before. With its high ceilings and abundance of natural light, this house presented an opportunity to try something different. “Joanna and I felt like this space could support bolder elements,” says the homeowner.

With this mandate, they began by fashioning a more traditional envelope with old-school architectural details – having such to-die-for oak herringbone flooring is a dream come true for the homeowner – and then injecting an eclectic modern mix to ensure interesting juxtapositions and edginess. Central to the aesthetic is an abundance of natural stone, including three types of marble. Defined by black-painted oak cabinetry and Nero Marquina marble contrasted with Calacatta, the kitchen exemplifies the daring new approach. “It’s a powerhouse,” says the homeowner.

While black and white plays a big part in the scheme, the look is far from stark or harsh. Along with fresh furnishings, a mix of items collected over the years or passed down from family introduces a sense of history and soul. Incorporating highly considered accessories (notably the statement light fixtures) and a few judicious pops of muted pink, jewel-toned blue and soft green goes a long way toward achieving an updated aesthetic.

“With six chickens out back and a flower garden, it’s like an urban farm,” says the homeowner. “Although it doesn’t look like it – it looks a lot prettier.” 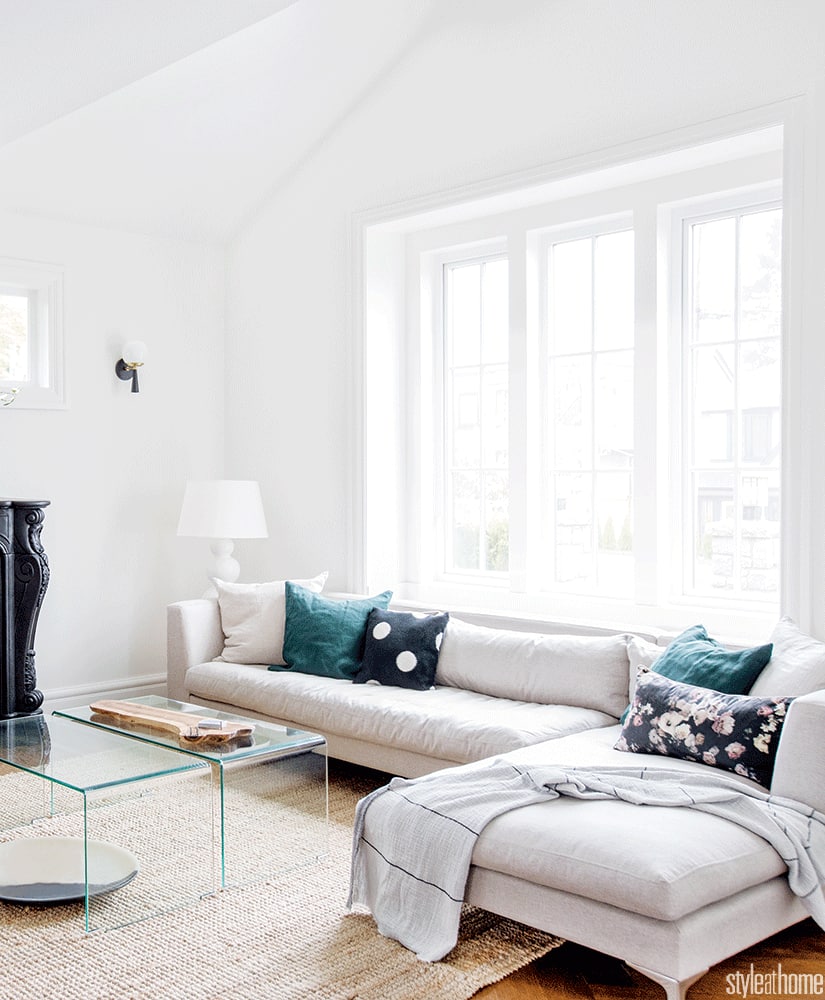 In the living room, a cast stone Louis XIII-style fireplace mantel, which was painted matte black, is juxtaposed with a plush sectional for an intriguing style contrast. 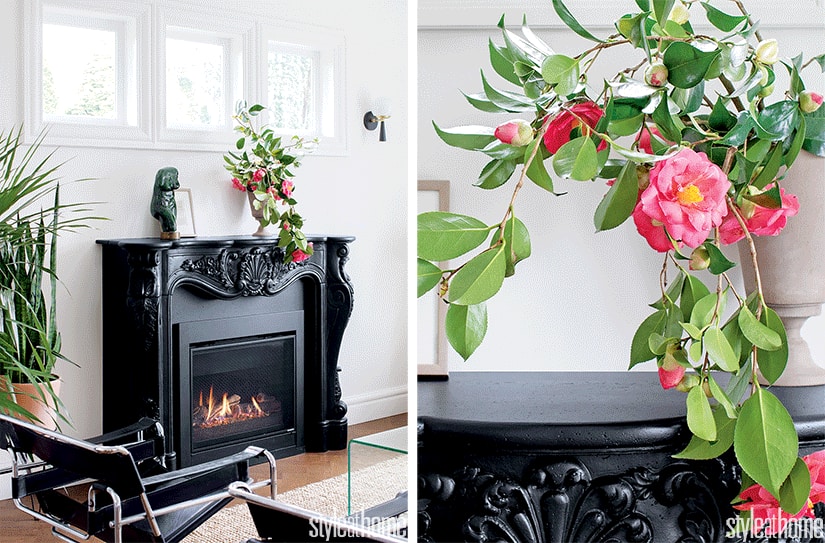 “A lot of pieces we used were items from her last house, which I also designed,” says Joanna, referencing the homeowner’s iconic Wassily chairs. “When you work with the same designer consistently, you’re able to reuse stuff from pro­ject to project, because items are picked with versatility in mind. Changing the accents they go with creates a totally different look.” 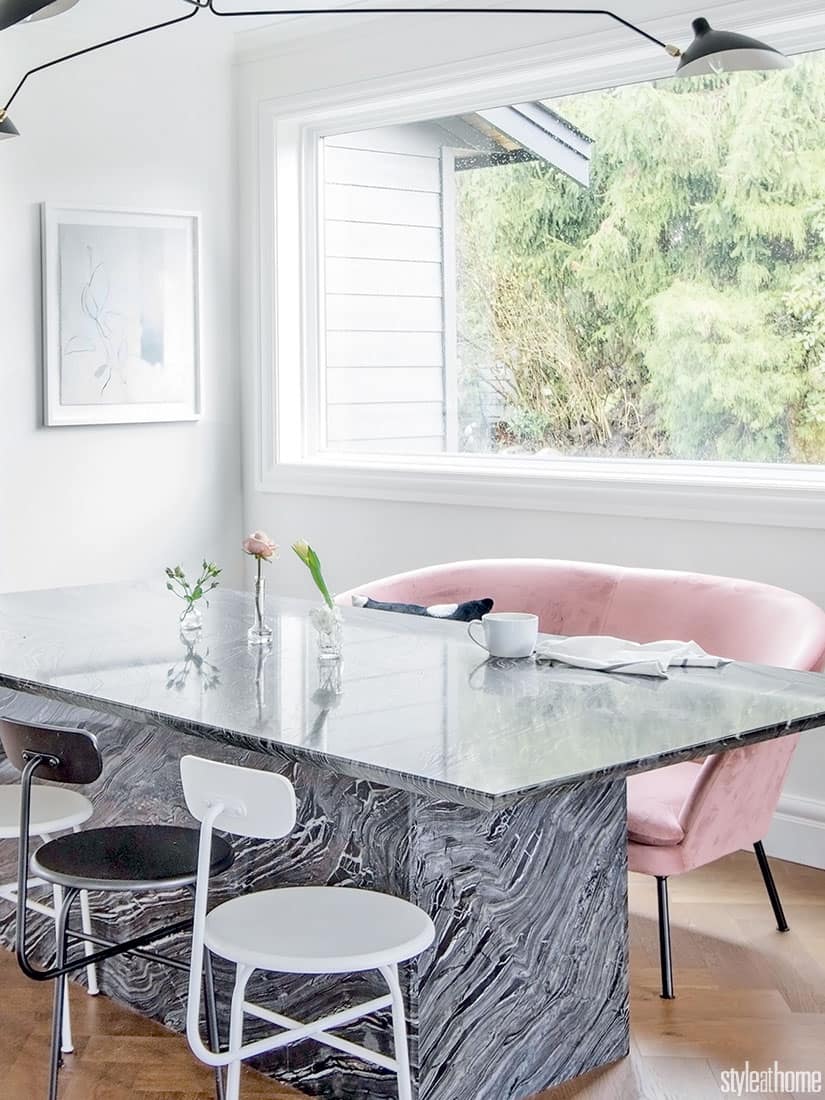 The curvaceous pink velvet settee adds a hit of glamour and pretty colour to the dining area designed by Joanna Vagelatos. The heavy look of the marble dining table is balanced by the lanky lightness of the chairs and Serge Mouille-style chandelier. 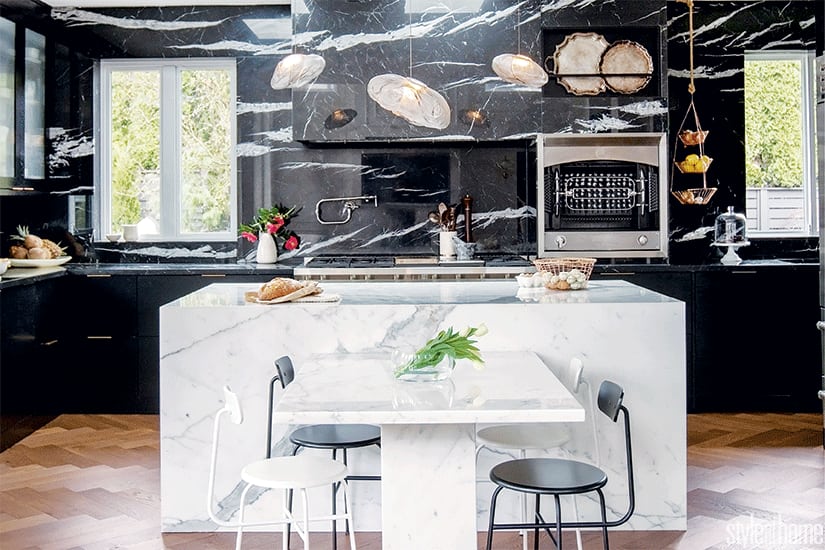 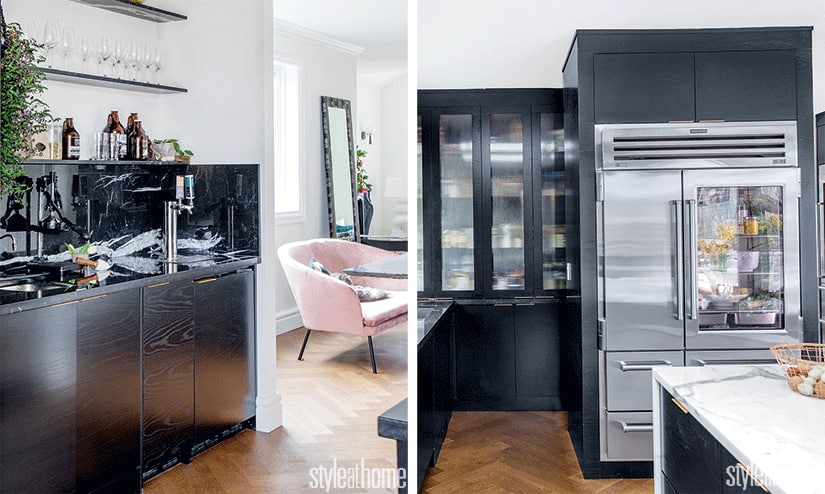 Opening up the butler’s pantry to the dining area improved the functionality of the home, which is made for entertaining. “We can accommodate 30 or 40 people in the house without a hiccup,” says the homeowner. This space showcases the visual texture of the Nero Marquina marble, with its beautiful white veining, and is kitted out with enviable bells and whistles, including taps for beer and kombucha. 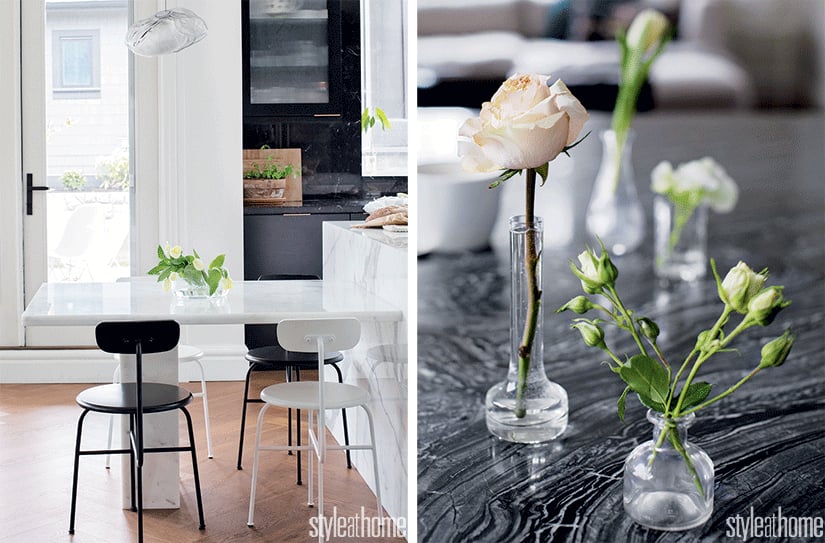 The pendant lights, which get their organic shapes from liquid glass blown into heat-resistant ceramic fabric, add an ethereal effect. 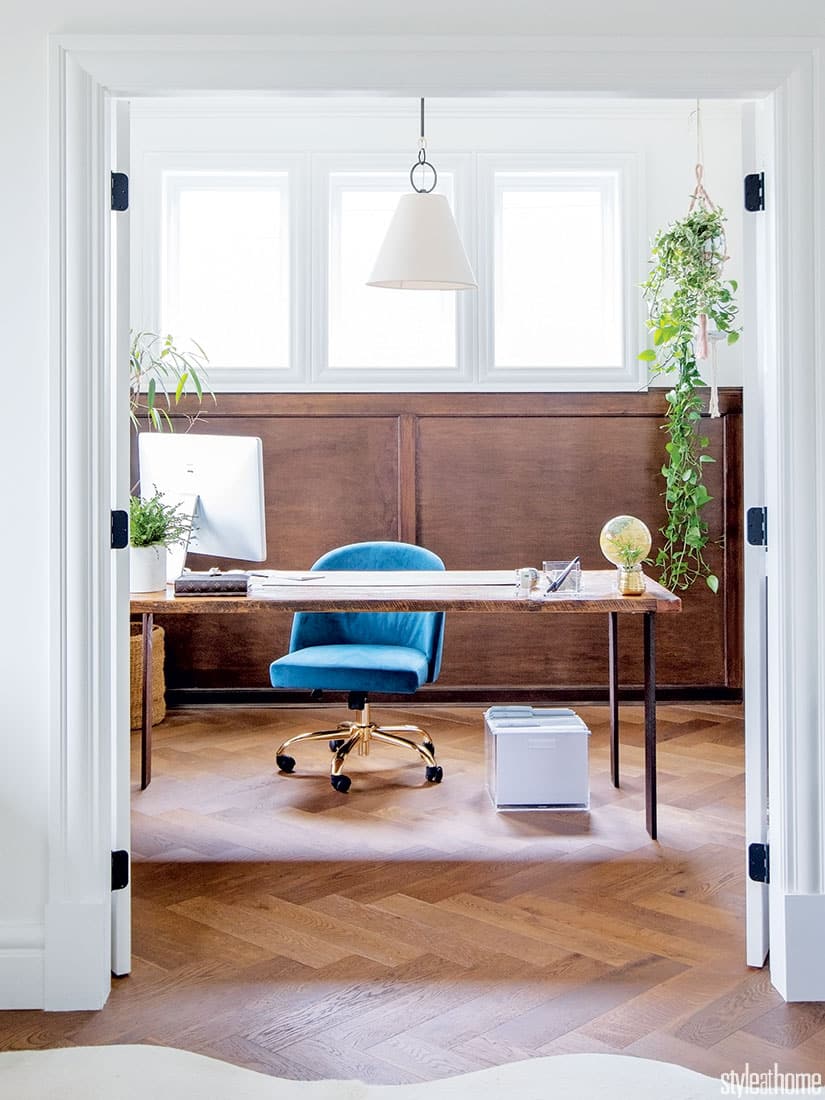 Dark wainscotting gives the office a formal masculine vibe, while a desk made out of reclaimed barnboard and locally handcrafted steel legs looks rustic and tells a story. “My husband went to college in Illinois, and that wood came from a derelict old barn there,” says the homeowner. “We brought it home and turned it into a desk. There’s a spot on it where a cow had gnawed.” The blue and brass chair adds an unexpected hit of glam. 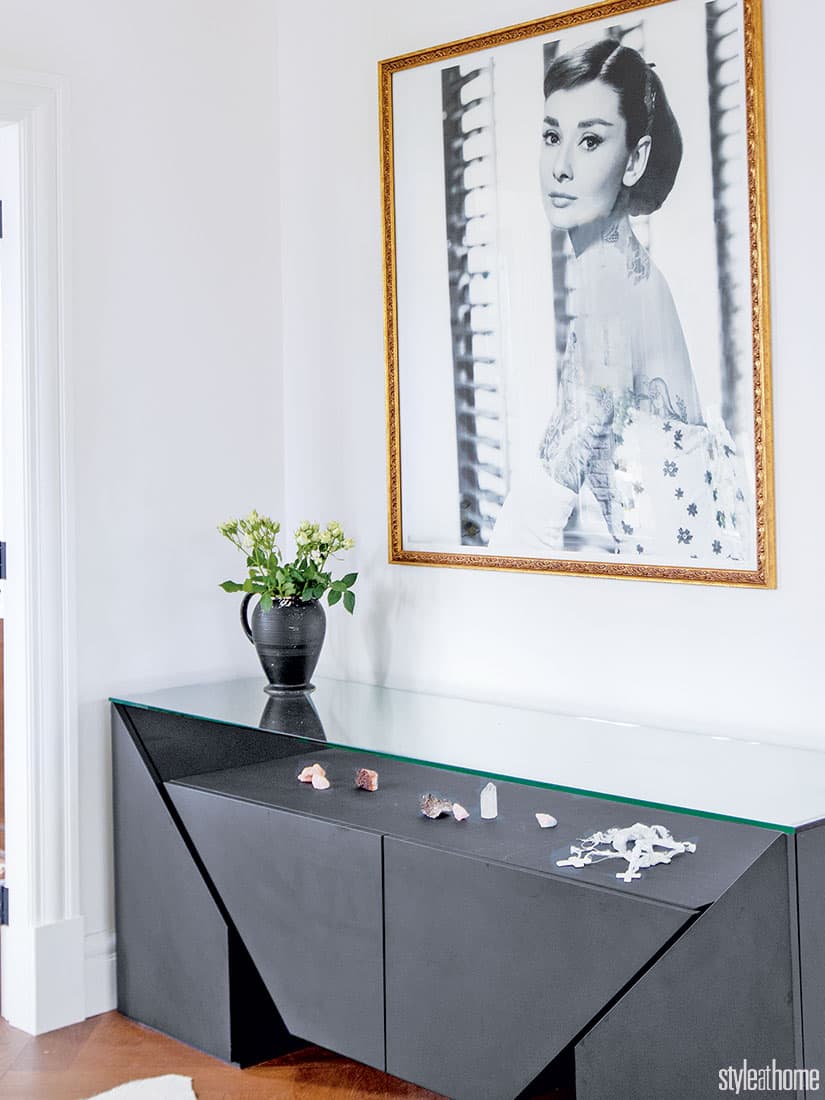 Artwork depicting an inked Audrey Hepburn sets the tone for the home’s contrasts. A Danish-made sideboard, which displays a collection of crystals, anchors the space. “It’s a special piece that’s been in the family for a long time,” says the homeowner. “It’s important to bring in elements that have a history.”

Designer Ami McKay gives a pink-loving girl a playful yet refined bedroom scheme that will stand the test of time.

An urban-chic abode you won't believe is technically a farmhouse