Take a tour of this cozy family-friendly retreat bursting with farmhouse chic.

“I call it the House of Pink,” says designer Margie Doyle White. That’s not to say that this home in Toronto’s historical Cabbagetown neighbourhood is anywhere near girly or frou-frou. A neutral palette, a mix of traditional items with a few modern pieces and strong architectural character keep this 3,000-square-foot detached Victorian sophisticated and refined. And, in fact, so does the pink.

When Raewyn and Charlie Fahlenbock purchased the house in 2014 for its coveted lcation, spacious layout (the structure was actually two dilapidated semi-detached rowhouses that were restored and turned into one home eight years ago) and good bones, the interior’s orange and brown palette was out of sync with its ultra-charming exterior. “It was a relatively new reno, but it made me think of,” says Margie. “On the outside, you saw this beautiful Victorian, but once inside, you felt like you were stuck in the ’70s. The two didn’t talk to each other.”

Charlie, a sales manager, and Raewyn, a stay-at-home mom taking time off from managing her family’s horse-breeding operation, share the house with their daughters, Olive, 2, and five-month-old Juniper. The couple wanted to bring back the property’s original charm, as well as create a cozy family-friendly retreat with a farmhouse feel. “Cabbagetown is like a quaint village that’s separate from the city,” says Raewyn. “So we wanted to give the space that same escape-from-the-city vibe.”

For Margie, formerly a designer on W Network’s Take This House and Sell It, the tricks to injecting the space with character were keeping the layout intact and adding or updating architectural details; replacing the tired, dark kitchen with something timeless and white; and incorporating key elements to create an urban English farmhouse aesthetic.

Enhancing the bright sunny house is its soft palette of taupes, whites and, of course, pinks, which stemmed from the living room’s wall paint colour. “It’s white with just a hint of lilac, so it’s livable,” says Margie. “I started with this one hue and then added a kiss of it throughout the entire place via drapery and toss cushions.” The original red oak floors got a dose of white, too. “It worked out really well because the white-stained floors give off a pinky tone,” she says.

In the backyard, the shady sitting area (defined by a cedar deck and pergola), large dining space and coach house-style garage boast the same pretty pinks and lilacs as the inside. “We continued the theme outdoors,” says Raewyn. “Because the open-concept kitchen and family room look out onto the backyard, everything had to flow and relate.”

The seamlessness between inside and out and from room to room creates the sense of calm Raewyn and Charlie were after for their farmhouse-in-the-city retreat, and it all starts at the front door with a wink of pink. “When we bought the property, the interior didn’t do this place any justice – it was disjointed and devoid of any character,” says Raewyn. But now that couldn’t be any further from the truth. 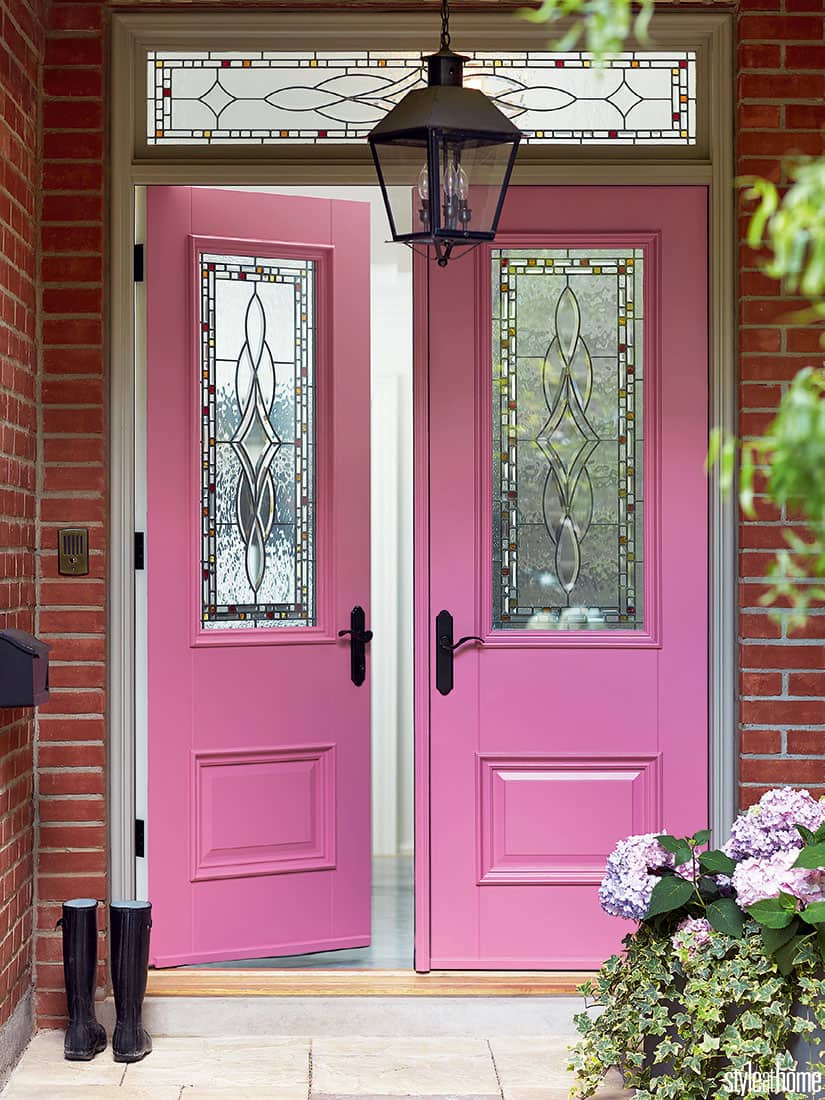 The pink front door complements the pretty scheme inside and makes the residence stand out. 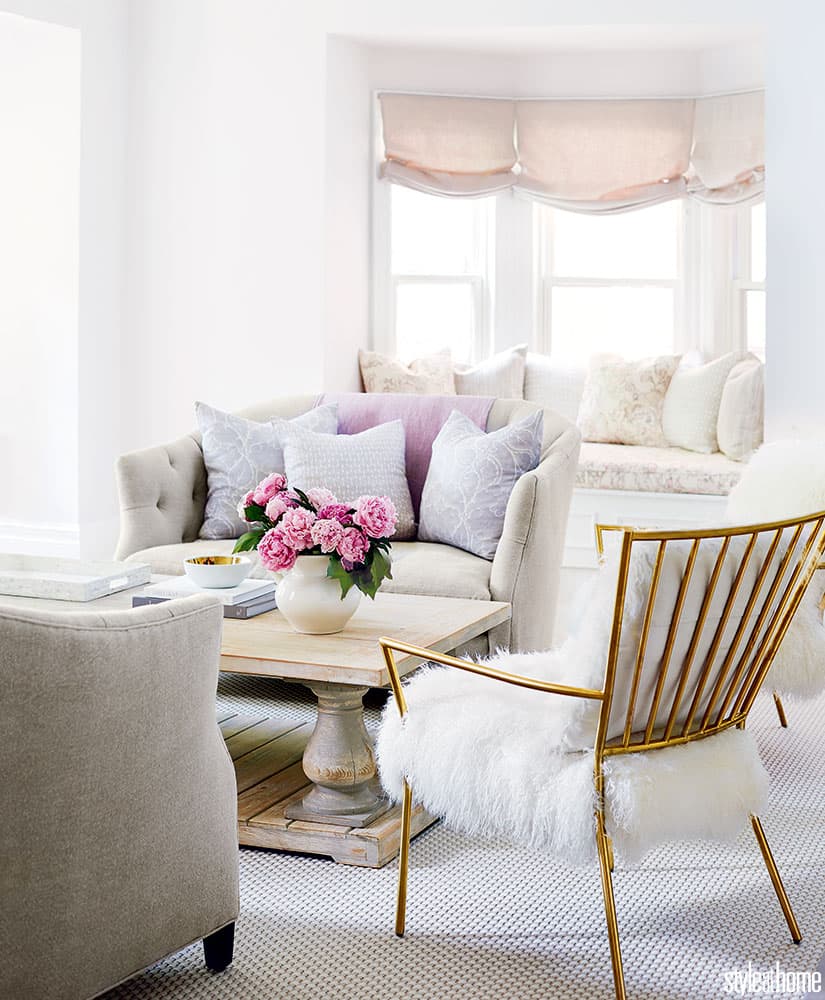 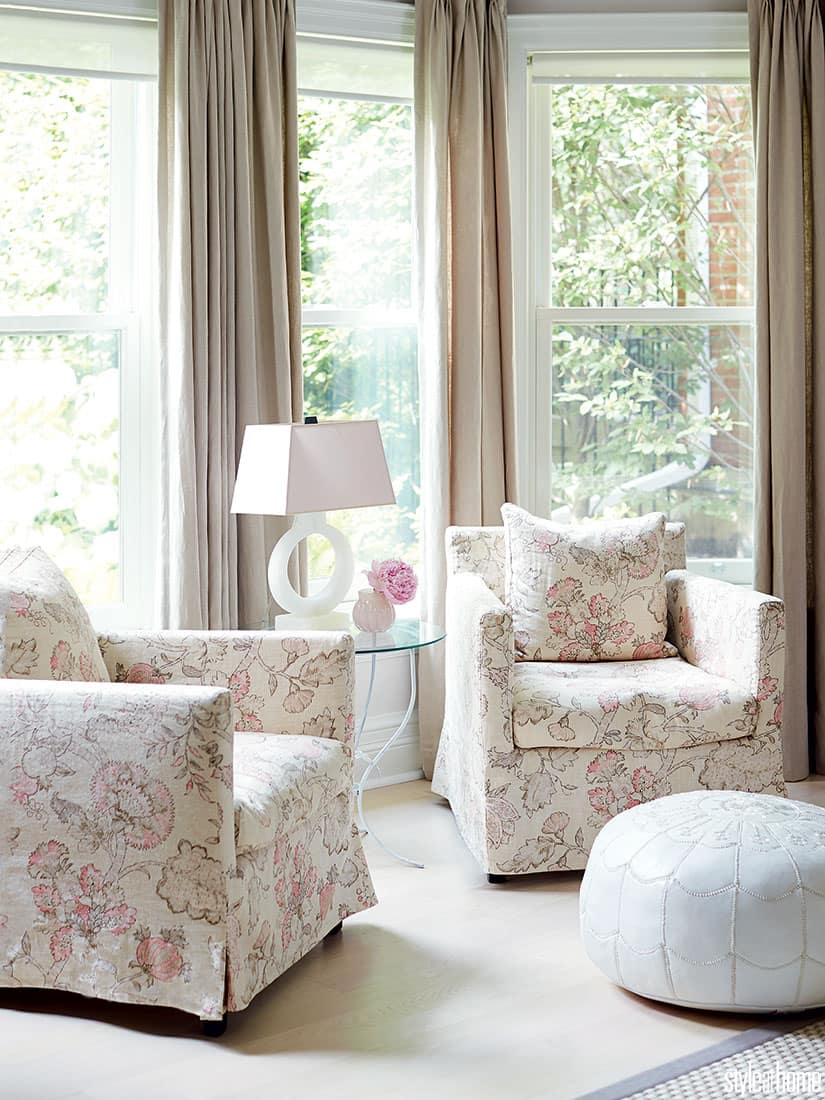 The second bay window, which looks out onto the lush front garden, creates an intimate sitting area in the living room. Chairs from the homeowners’ previous house were recovered in a sophisticated floral fabric. 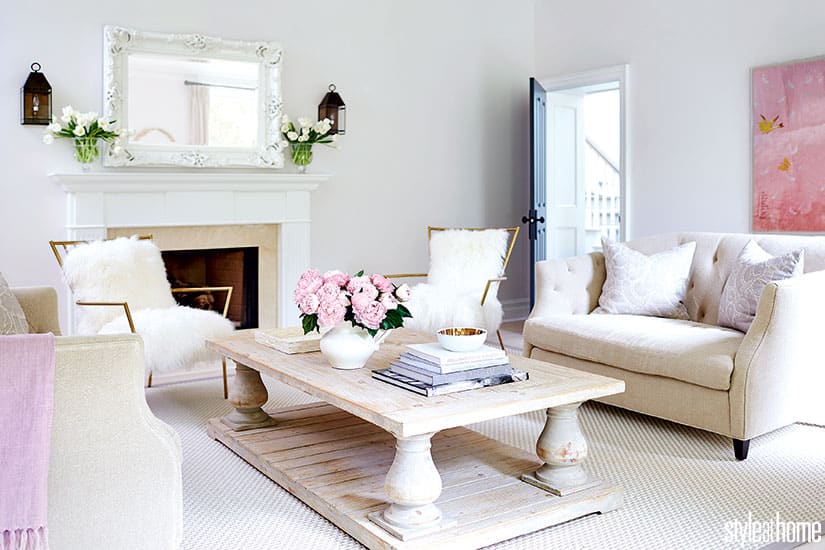 The living room’s wall colour – white with a lilac undertone – was the jumping-off point for the home’s feminine scheme. “This white makes everything feel so fresh,” says designer Margie Doyle White. 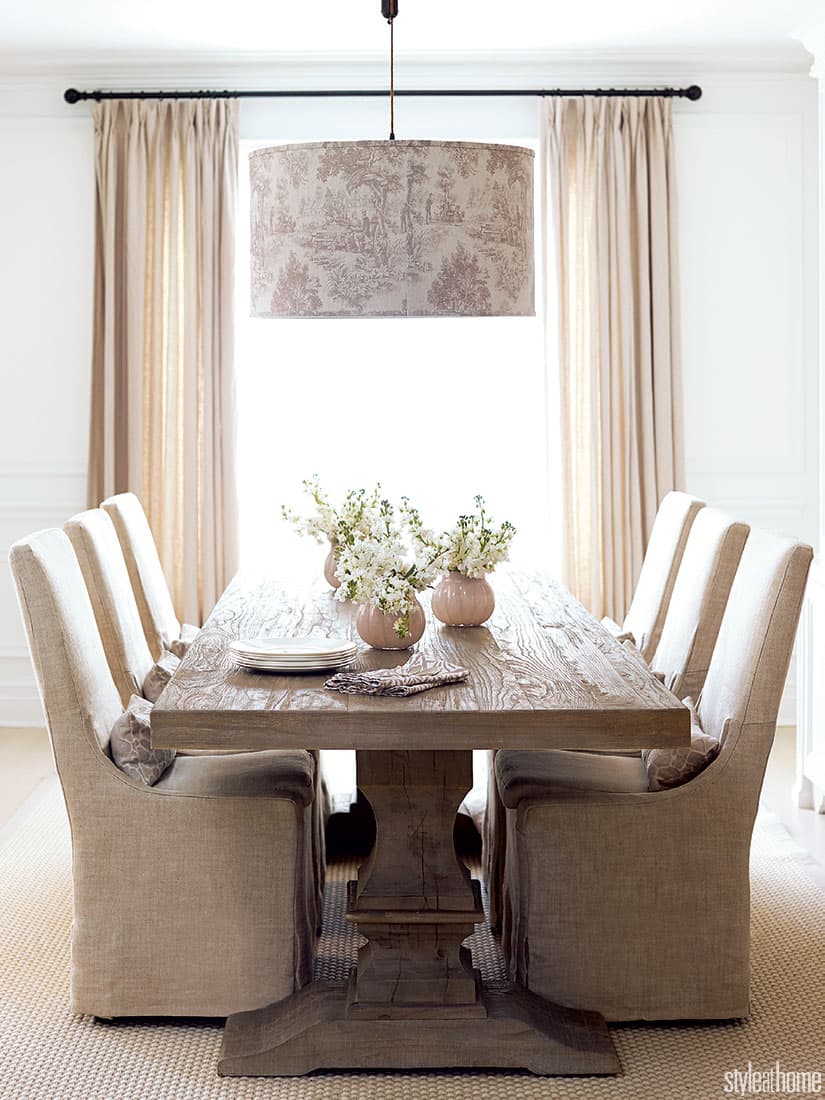 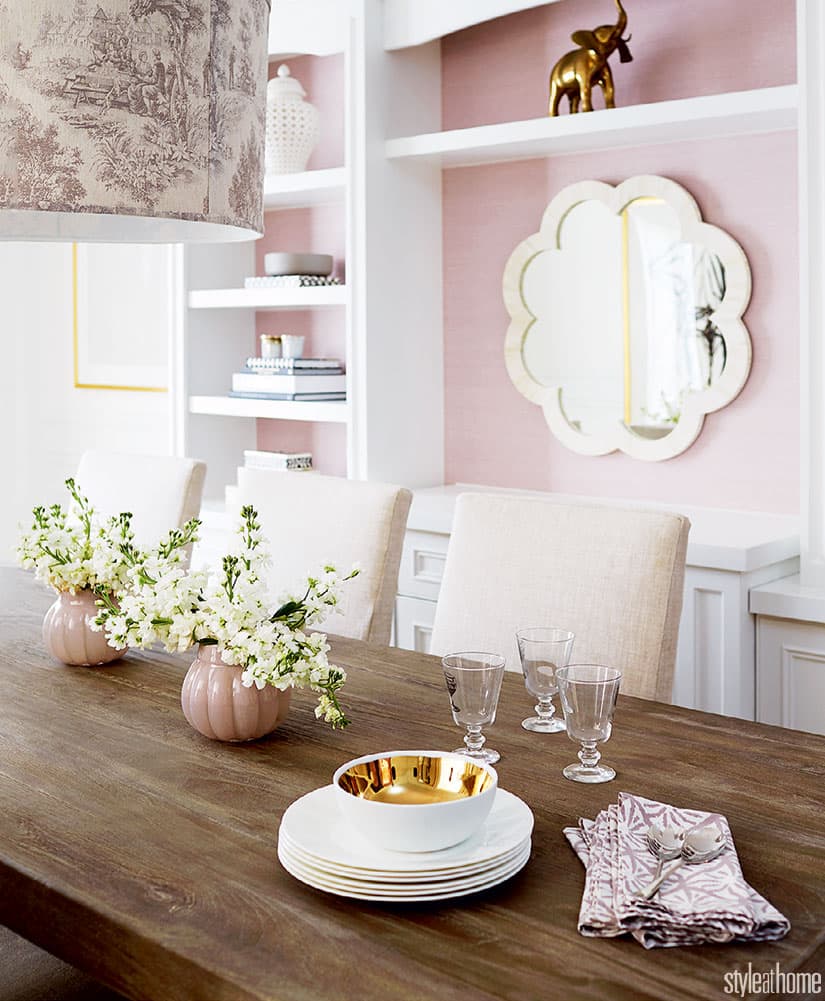 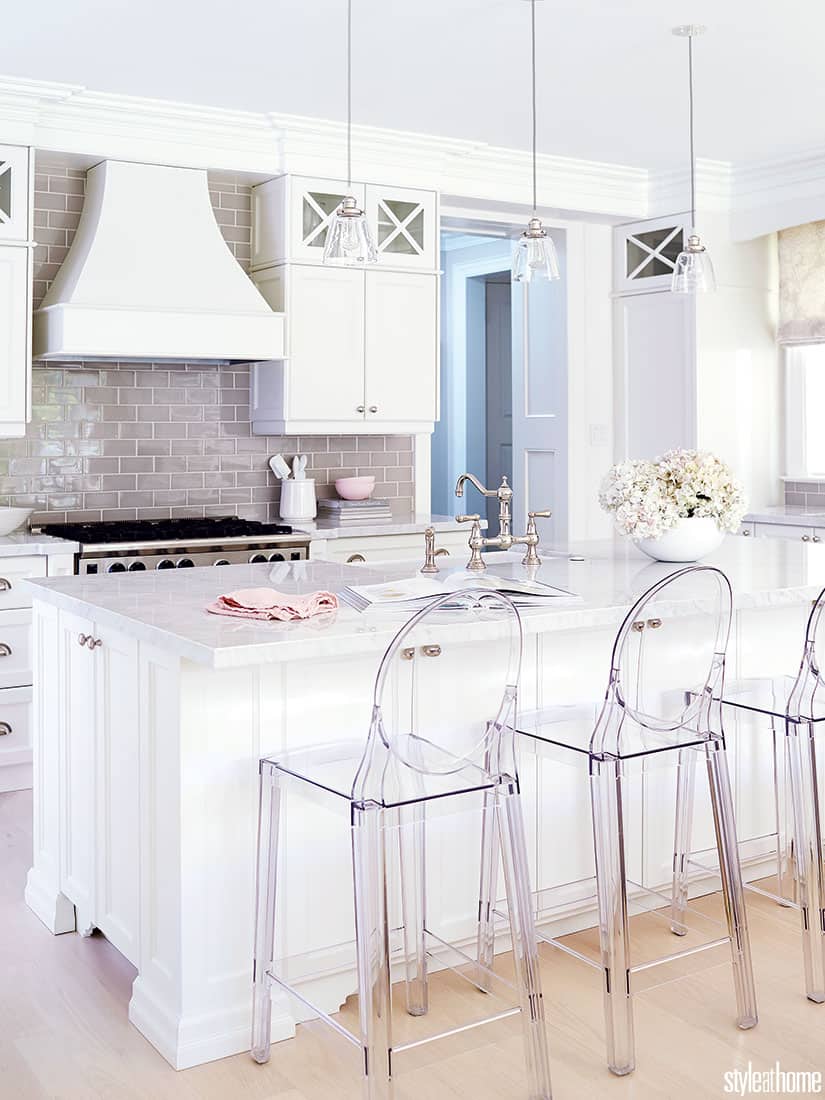 The kitchen’s high ceilings allowed for chunky crown moulding, and glass-fronted upper cabinets with an “X” detail add even more architectural interest. A backsplash of greyish taupe ceramic subway tiles offers a soft hit of colour in the all-white space. See-through elements like the stools keep the look bright and airy. 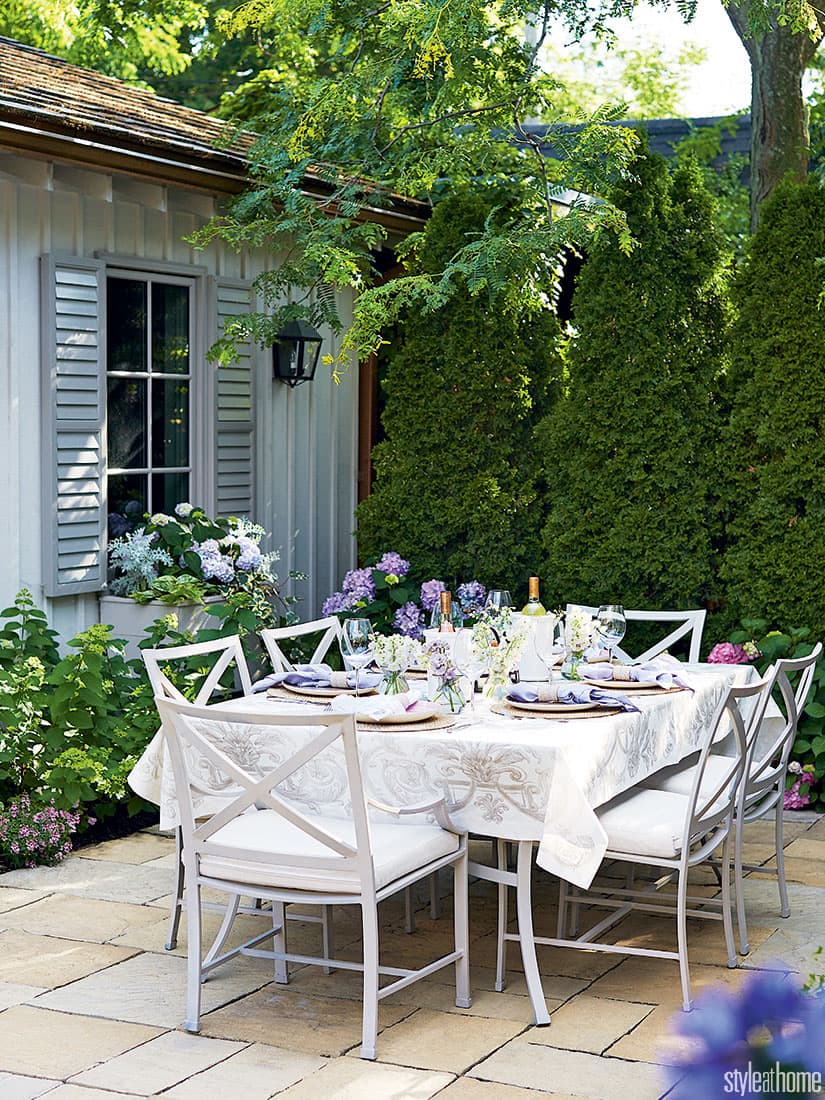 The former garage, which was basically a windowless stucco box, was supplanted by a coach house-style structure. Its board-and-batten siding, shingled roof and shuttered windows now give the backyard a good dose of character. It also serves as a charming backdrop for the alfresco dining area. 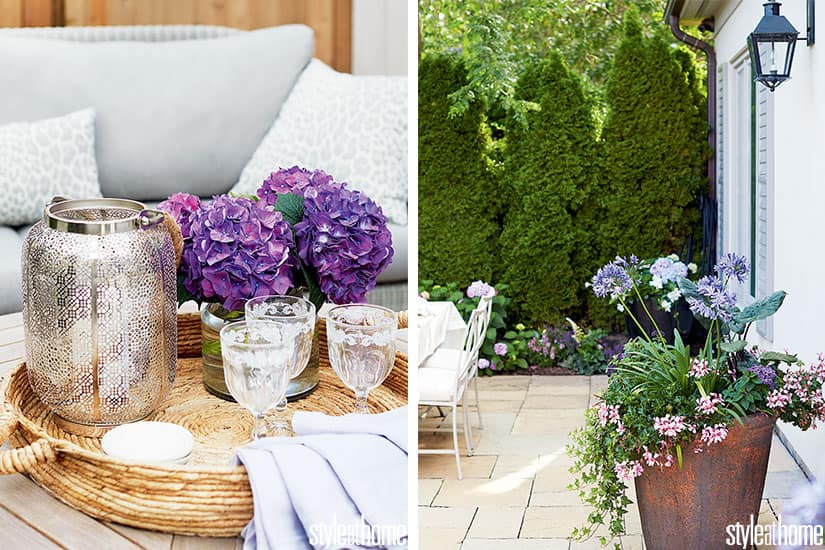 The lilac and pink plants throughout the backyard tie in with the home’s interior palette. 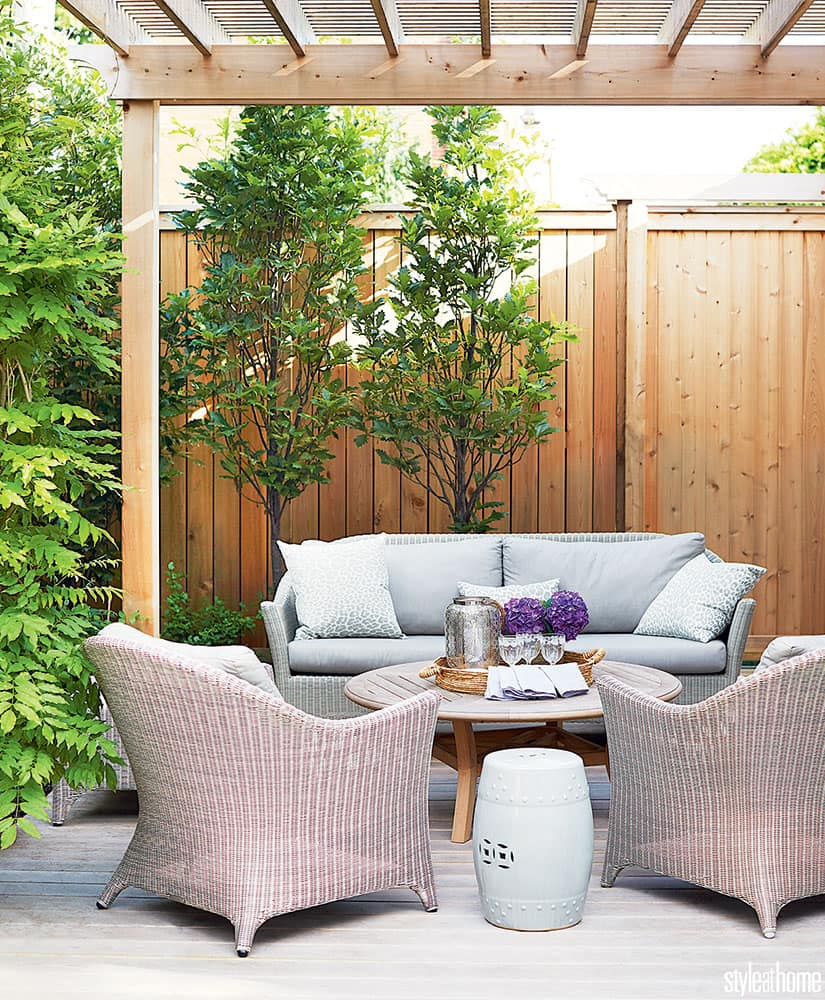 A cedar deck and pergola define the outdoor sitting area and provide a shady spot to lounge in the backyard.

Dilapidated Victorian gets a pretty-in-pink makeover