Visitors to the busy family kitchen of Christine Dovey’s former Oakville, Ont. home might think they’d mistakenly stumbled into a high-end fashion boutique in Paris. The super-feminine space, dreamed up with the help of designer Meredith Heron, had loads of custom details and high-end finishes. “It was definitely my dream kitchen and totally ‘me’ at the time,” Christine recalls fondly.

Five short years later, a lot has changed. The house she and her family live in now, only a few doors down from their previous home, was bought on the premise that they would renovate and then flip it. “It was a total disaster when we bought it,” says Christine, now a designer herself. Because they were planning to sell the home quickly, she planned the kitchen to have wider appeal and intended on a much more realistic budget. “There were so many huge budget-blowing structural issues with this renovation, the kitchen plans kept taking a hit,” she explains. Still, her sense of style didn’t waiver as the project scope grew. “It became apparent about halfway through the project that we would, in fact, be selling our own home and moving into this one.” This realization allowed for bolder design choices than Christine had originally planned, and the kitchen — which, like her old one, is distinctly un-kitchen-like — began to emerge as the stunning space it is today.

“There is much more of a balance between masculine and feminine in this kitchen,” Christine says. “My style has definitely evolved that way.” Now, black lower cabinets, sections of oak cabinetry and an extensive use of subway tile (including on the range hood) give the new kitchen a decidedly different look from her previous one. Other hits of Christine’s trademark drama come from oversized iron gates in the room’s two wide doorways, a massive antique cabinet in the eat-in area and an island sheathed in shiny brass. “An unintentional black and white thing started happening, so I wanted to tone it down a bit,” she explains. The brass details, the oak cabinetry and gilded antique dining chairs all provide necessary balance.

So does Christine miss her old kitchen? “There are definitely things I miss, like the custom dining banquette, the gorgeous vintage light fixtures…but this one functions so well for our bigger family now.” 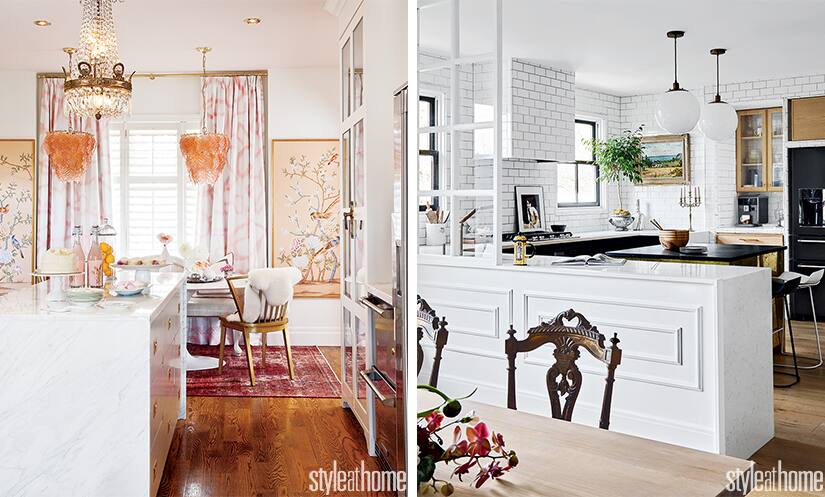 Glittering vintage light fixtures have given way to simpler styles in Christine Dovey’s new kitchen. The hyper-feminine, glamorous accents in the previous space only appear sparingly in the new, including the vintage gilded dining chairs she found online. Silvery stainless appliances in the previous kitchen have been replaced with KitchenAid’s gorgeous stainless black in the new — “much better for hiding kid fingerprints!” Christine says. 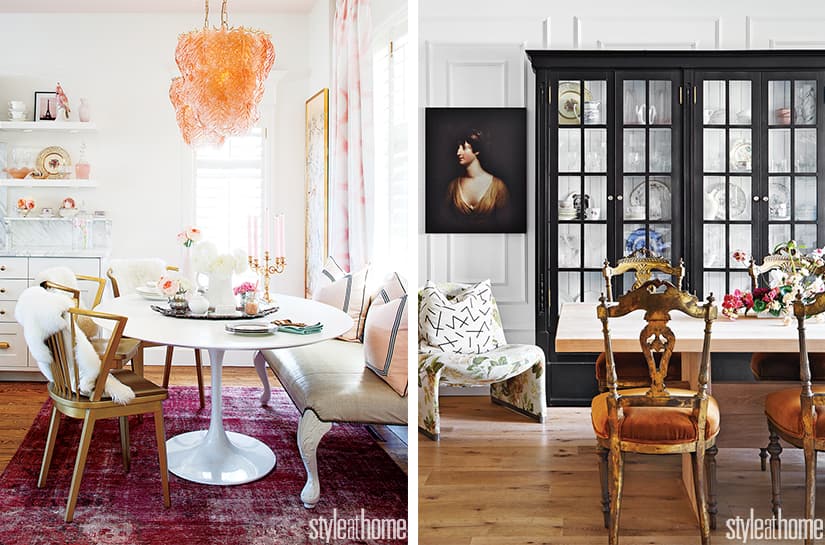 Simple modern table forms are paired with more ornate chairs in both the “then” and “now” eat-in area. Christine had the raw oak table custom made for her new kitchen, and specified a very clean-lined design to balance the antique chairs. Although she misses seating lots of kids on the custom banquette in the old kitchen, she prefers the unique antique gilded chairs. 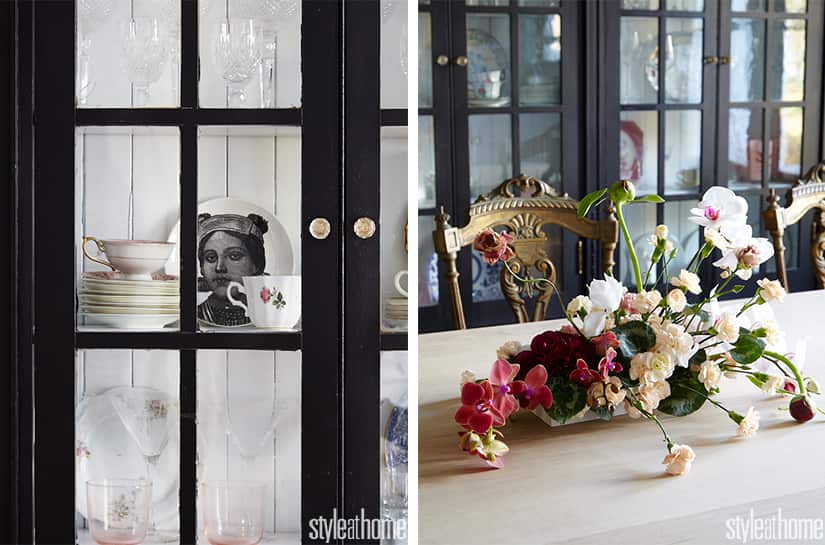 This oversized antique cabinet was a lucky antiques market find and holds all of Christine’s heirloom china. In the former kitchen, beautifully ornate hardware and antiqued glass panels made the accent cabinetry a work of art, with a budget to match. “We saved thousands by making different cabinet choices in the new kitchen,” Christine admits. “The whole-house renovation budget demanded it!” 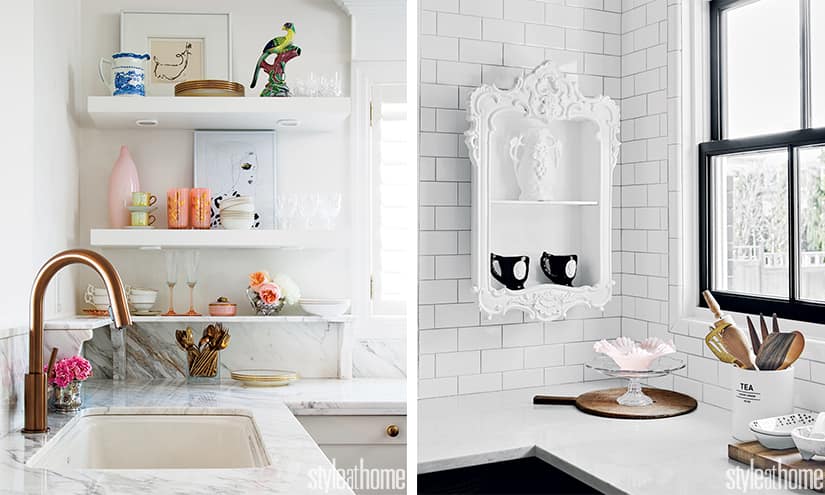 The white subway tiled walls are simpler and more utilitarian than the custom marble backsplash of her previous kitchen, but their cost ballooned when Christine had to special order all the edge pieces to wrap around corners and windows. This room’s take on open storage — a feature repeated from the old one — includes this small cabinet that has been painted white. 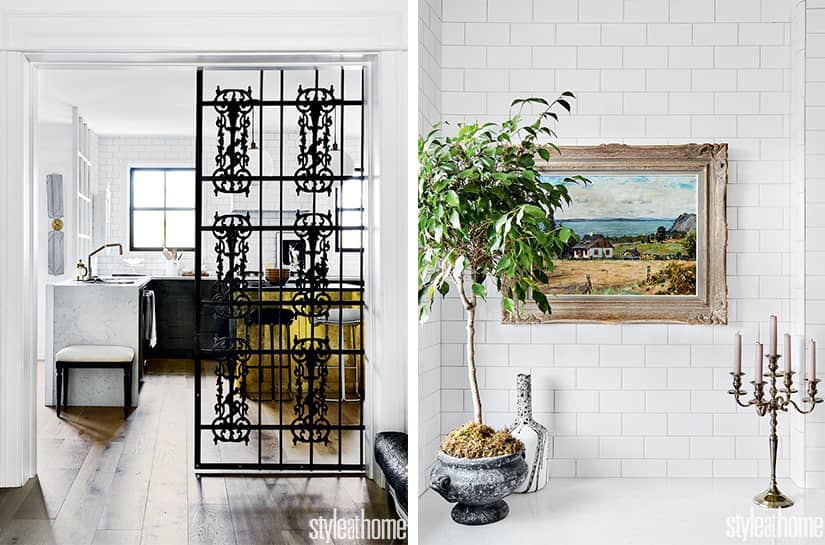 Christine created the glam island in the new kitchen by pushing standard cabinetry together to create the right size and shape, and then having them clad in brass sheeting. Although it was inexpensive, it yielded a high-end custom look. Large antique iron gates, found at a Toronto salvage shop, slide across to give a hint of division between the kitchen and the rest of the house.