Despite a few hiccups along the way, building this cabin was truly a labour of love.

Lifestyle blogger Lynne Knowlton knows what she likes: white for decorating, Baileys for drinking and reclaimed materials for building. So when she set out with her husband, Michael, to build a summer rental cabin on their 100-acre property in Durham, Ont., she pretty much had it all planned out: The abode would be nestled in the woods, and it would be tiny (just 400 square feet). It would also boast lots of natural light and a loft bedroom. And, most important, it would be finished in time for the summer rental season.

“I’d blogged about the cabin ahead of time, so it was completely booked long before it was built,” recalls Lynne, who had the space constructed as a companion to her popular rental tree house. Already, the project faced a challenge: Durham is in a snowbelt, so the building season is short. And time was already tight, since a kitchen renovation in the couple’s main house had gone terribly wrong. In the midst of this came a complete game changer. Michael, who has cancer, learned from his physician that his condition was terminal. “There was no way that cabin was going to be ready,” says Lynne.

Then, something amazing happened. Neighbours, family members and friends showed up to help. “It was unspeakably moving,” says Lynne. “Even complete strangers arrived with paintbrushes and hammers in their hands.” Thanks to the can-do spirit of this impromptu team, who executed the decor details, the cabin was completed on time for the holiday season. “It was close, though!” says Lynne. “I swear the paint was still wet when the first renters arrived.”

Plans veered off course in plenty of other ways during the process. At first, Lynne hadn’t considered positioning the peaked windows up top. But when the cabin was only a frame with lower walls, Lynne walked through and changed her vision: “Light was just pouring into the place,” she says. “I didn’t want to lose that.” So she abandoned the original drawings and fitted triangular windows to the peaked roof. “Now you look up and see trees and sky,” she says.

The placement of the paned windows was altered a bit, too. “Before the building was complete, I’d wander around, just holding them up against the would-be walls the way you’d hold up a painting,” says Lynne. “I definitely didn’t take a by-the-blueprint approach!” The result is a sparkling, light-filled interior thanks to vintage windows in a delightful collection of shapes, sizes and locations.

For all that changed, the cabin still reflects Lynne’s original vision. As planned, she used rustic and handmade materials, such as reclaimed barn beams for the exposed frame and shiplap for the walls. She also employed natural country-style details, such as tree branch curtain rods and hammam towel café curtains in lieu of cabinet doors.

The cabin is now in its second summer season, and it continues to embody what Lynne loves most – white furnishings, white walls, white dishes and white milk glass. “You’d think the last thing a woman living in a snowbelt would want is more white – but nope! I love it,” she says. Besides, white is what makes the cabin look so fresh in summer.

Though the cabin was booked every weekend in its inaugural year, Lynne has set aside time this season so she and Michael can enjoy the cabin and tree house that are dear to their hearts with close family and friends...because what’s the point in having these incredible spaces if you can’t make memories in them, too? 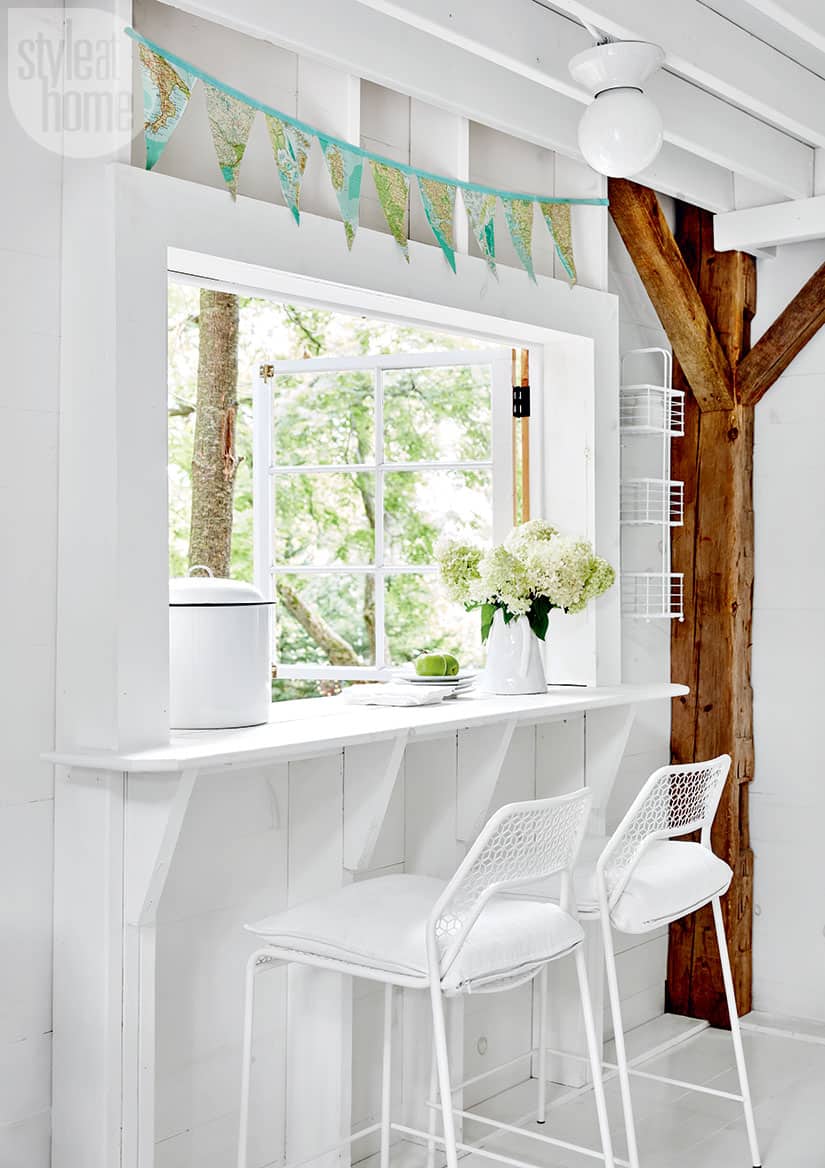 What a way to wake up: coffee at the counter with the windows swung open to the trees and birdsong outside this quaint rustic bunkie. This spot is also a great place to unwind with wine and an evening breeze.

Cottage Style Tip: Add eclectic accents like this bunting made from vintage maps for playful whimsy in rustic surroundings. 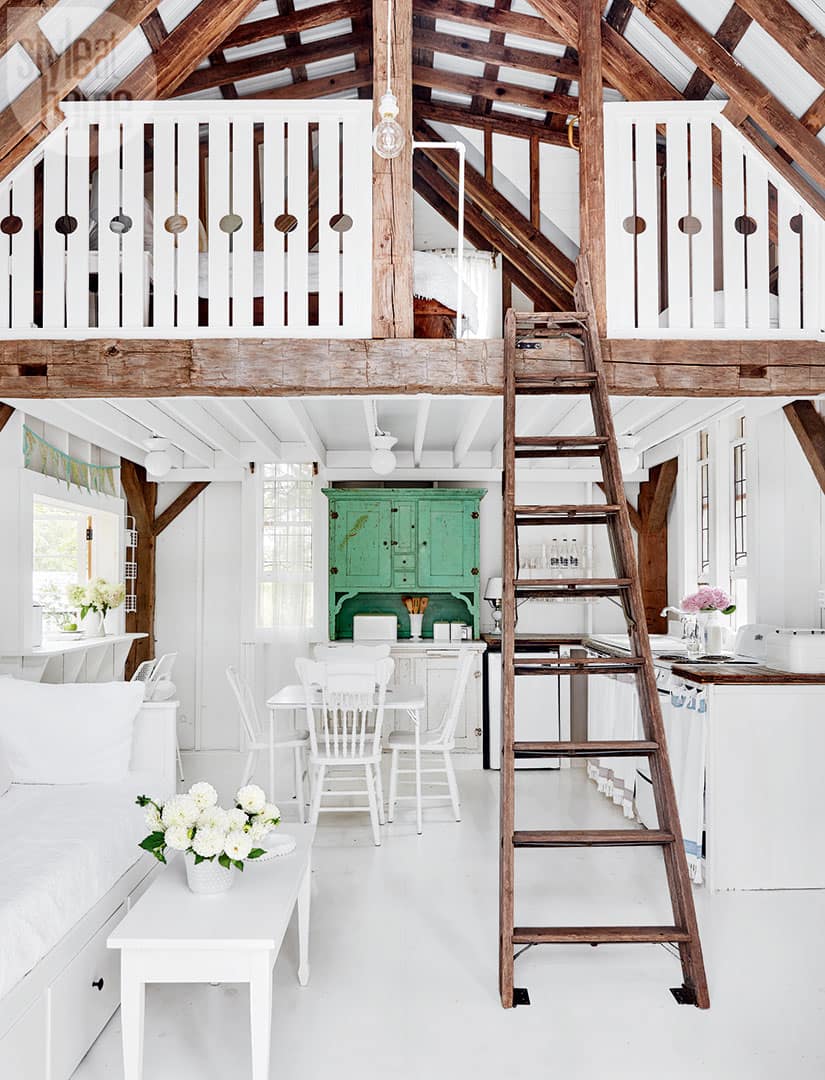 Throughout the cabin, the furnishings are humble, antique and handmade: An Amish craftsman made the floorboards, the antique beams were reclaimed from a barn and the ladder was purchased at a local antiques shop. 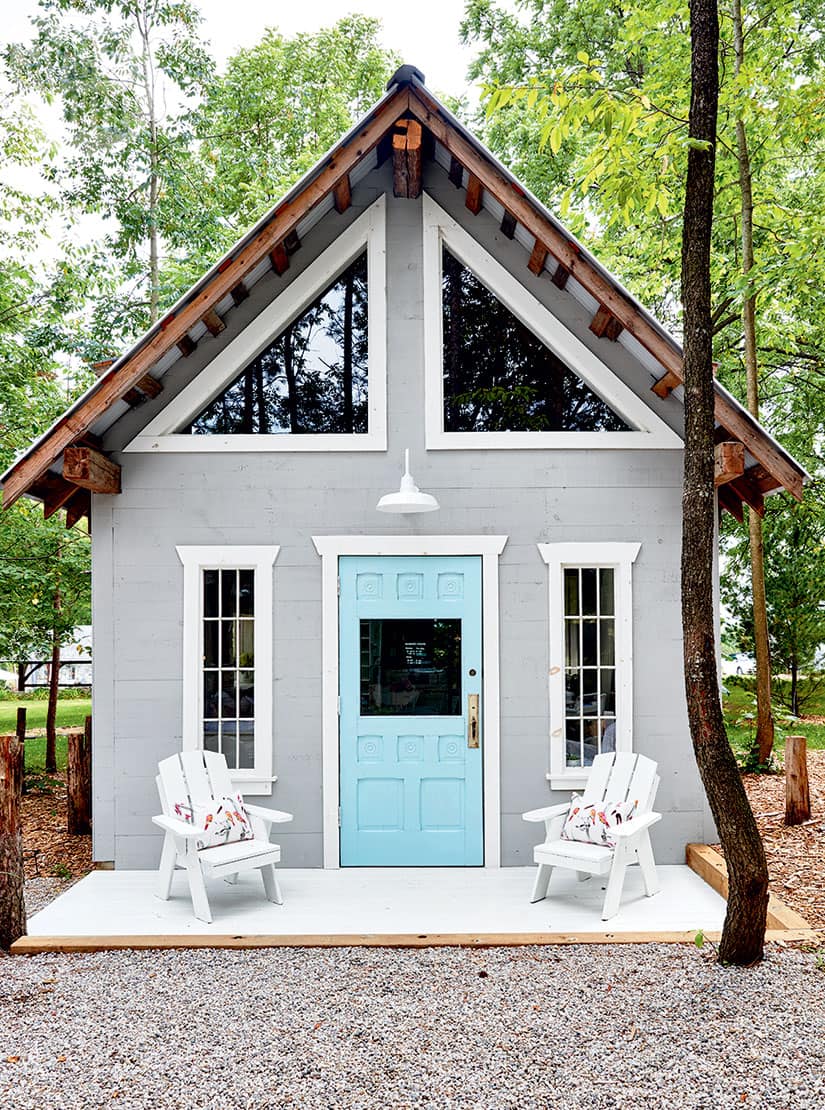 Triangular windows accentuate the cabin’s peaked roofline. The pastel blue door picks up on the Muskoka chairs’ colourful toss cushions, which match those in the bedroom for a cohesive scheme, inside and out. 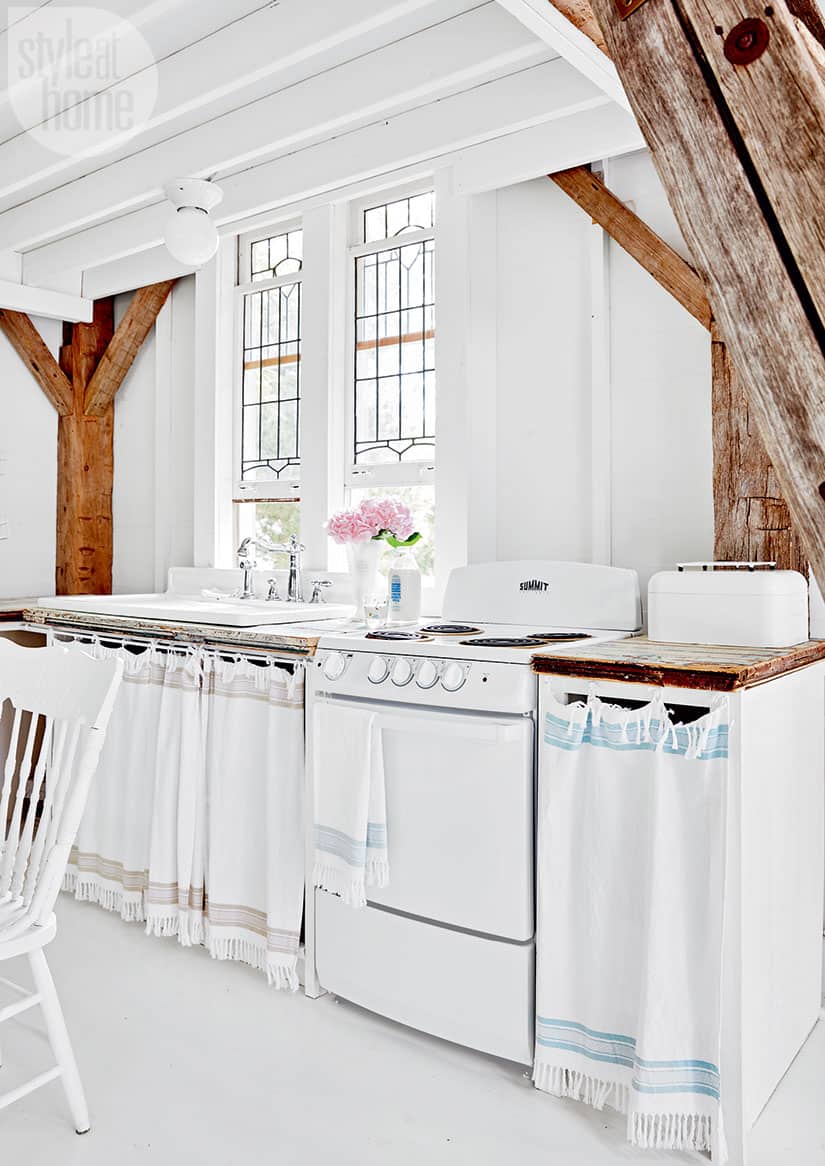 One of homeowner Lynne Knowlton’s gifts is her ability to pull together disparate elements. Just look at the kitchen, where a farmhouse sink, a Victorian-style faucet, vintage leaded windows and pastel ersatz café curtains come together to delightful effect. 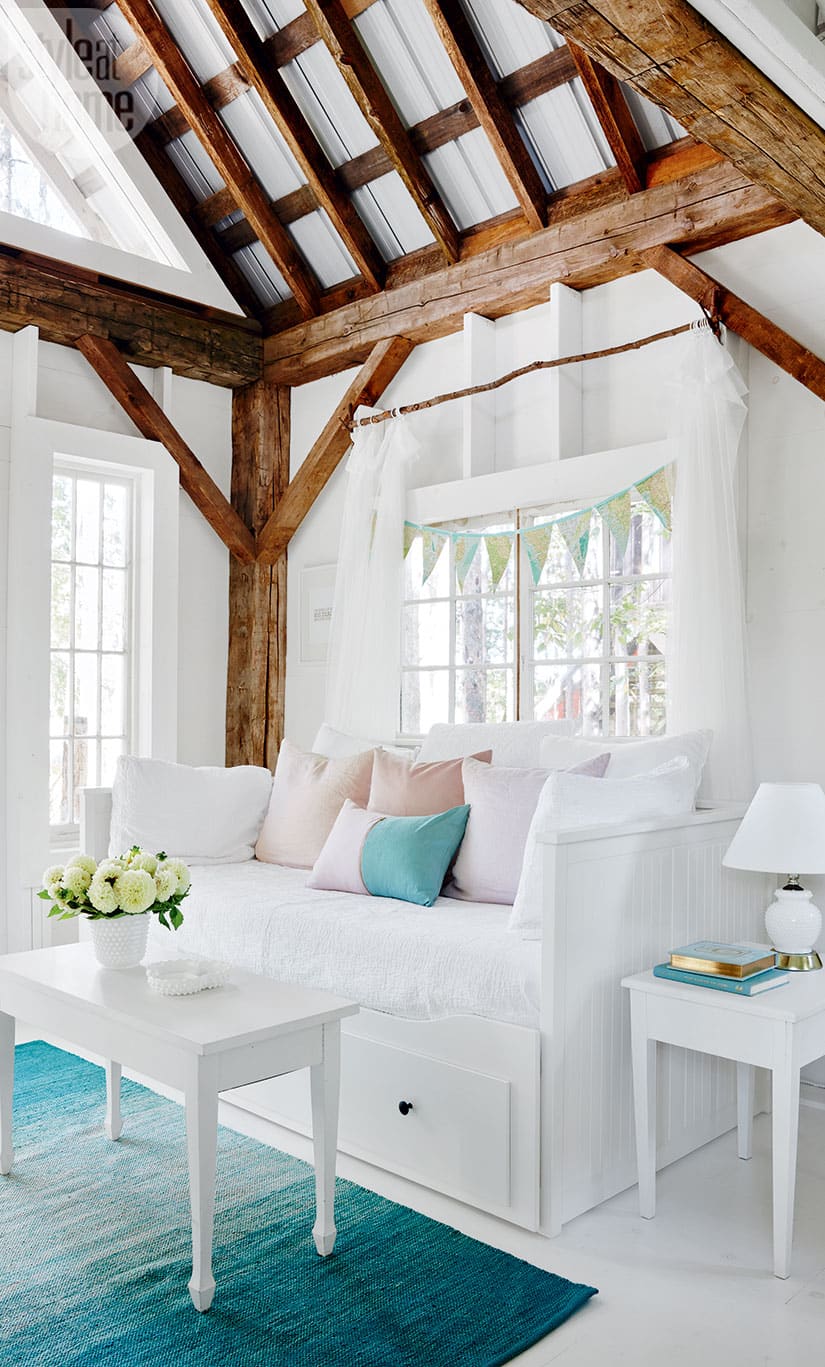 The cabin feels larger than its 400 square feet thanks to vaulted ceilings and windows galore. Ever-clever Lynne used branches for drapery rods and mosquito netting as drapery. The pullout sofa provides bonus slumber space for guests, and plush toss cushions in soft pastel hues make for a serene space to host cocktail hour. 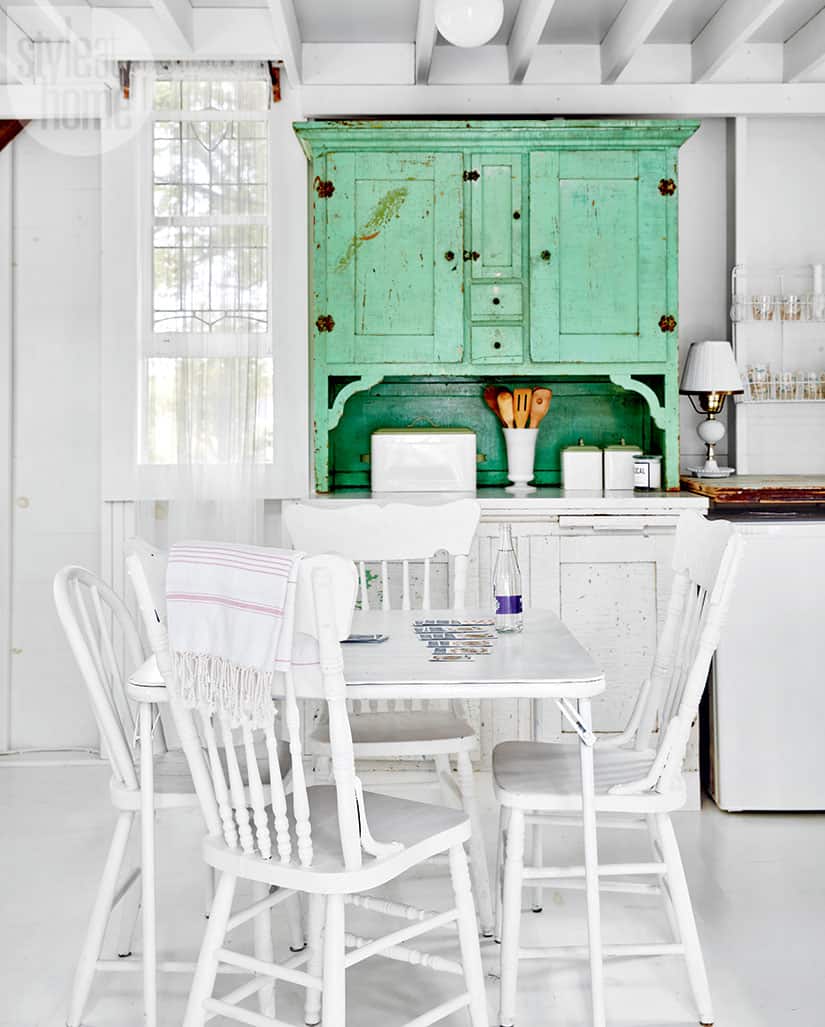 Tucked beneath the loft, the light-filled kitchen gets a jolt of colour from an antique armoire that Lynne found in an old barn. The card table, which she painted white, can be folded up and tucked away if space is needed.

Cottage Style Tip: Recreate a vintage distressed finish on new pieces with some sandpaper and a little elbow grease. 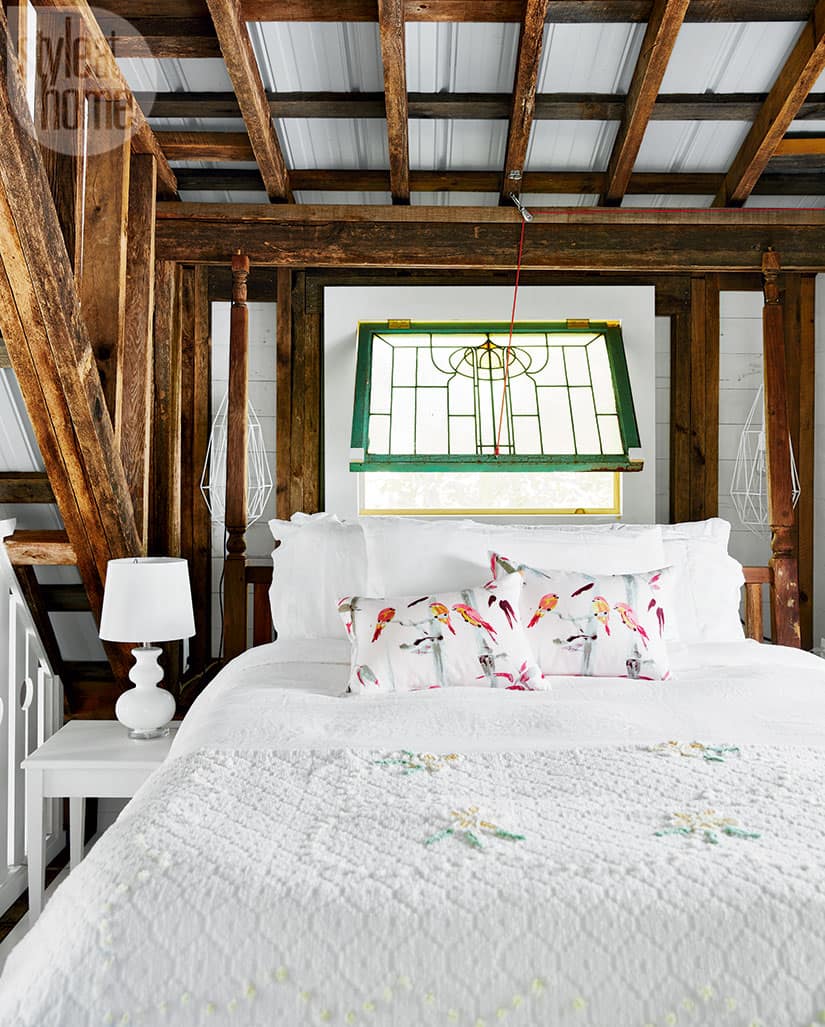 The loft bedroom is the cabin’s snuggle zone. Vintage touches, such as the chenille coverlet and milk glass table lamp, make the room seem like it has been making guests cozy for decades, even though it’s less than two years old.