An all-white cottage poses a danger. Fill it with frilly bedskirts and contrived country furnishings, and it can feel too precious and pretty, especially if there’s a man in the house. But done with the right balance of complementary tones and personalized touches, it can be an unmatchable thing of beauty: serene, pristine and ideal in a seaside setting.

A good example is the heavenly 700-square-foot cottage in P.E.I. owned by Kevin Austin of Vintage Fine Objects in Toronto and his wife. Kevin admits that buying a cottage retreat three provinces over may seem extreme: “Some Ontario people think we’re crazy to have a cottage so far away, but if you’ve been to the Island, you know,” he says. “We lead busy lives in the city and love the beauty and pull of the ocean. It’s very much an all-senses experience being there. And the people are the best!” (Though some might say he’s biased, since his wife hails from a long line of Islanders.)

The six-room cottage itself was also a draw. At one-and-a-half storeys, it came with a charming facade including red shutters that sport crescent-moon cutouts. “The interior design was very much inspired by the character of the building – it’s about 75 years old and close to the ocean,” says Kevin. “Another lure was the whale weather vane on the roof. Those cues led us to a coastal look with a bit of preppy and modern mixed in,” he says. “We like a combination of fine antiques, new classics like the sofa, and thrift shop finds so that things aren’t too sweet.”

As for the palette, the couple chose lots of blues, greys and yellow accents, plus “plenty of white for a sense of airiness.” When they took possession more than two years ago there were 13 different paint colours in the place. (It took about two weeks to undo the hues, and to update the bathroom and kitchen.) “We wanted a fresh start,” says Kevin. “There’s a quote from the famous decorator Elsie de Wolfe: ‘I believe in plenty of optimism and white paint.’ That was our mindset, too.”

And they followed it well. A confident dose of maritime flair – a banister made of sisal rope, jute rugs and a casual salon-style art wall depicting seaside scenes – makes it a restful, down-to-earth retreat. Ditto cottage classics like wainscotting and painted plank floors. It’s the type of place that makes you want to loll around all day with your feet up and a good book – but don’t call it rustic: “We gave top priority to getting comfortable beds and pure cotton bedding – there’s nothing like that feel- ing of falling into a fresh, beautifully made bed after spending a day at the beach,” says Kevin.

And indeed, in this relaxed cottage, the concern that weighs heaviest on everyone’s mind through the course of the day is what to have for dinner that night: Will it be mussels, clams, oysters or lobster? 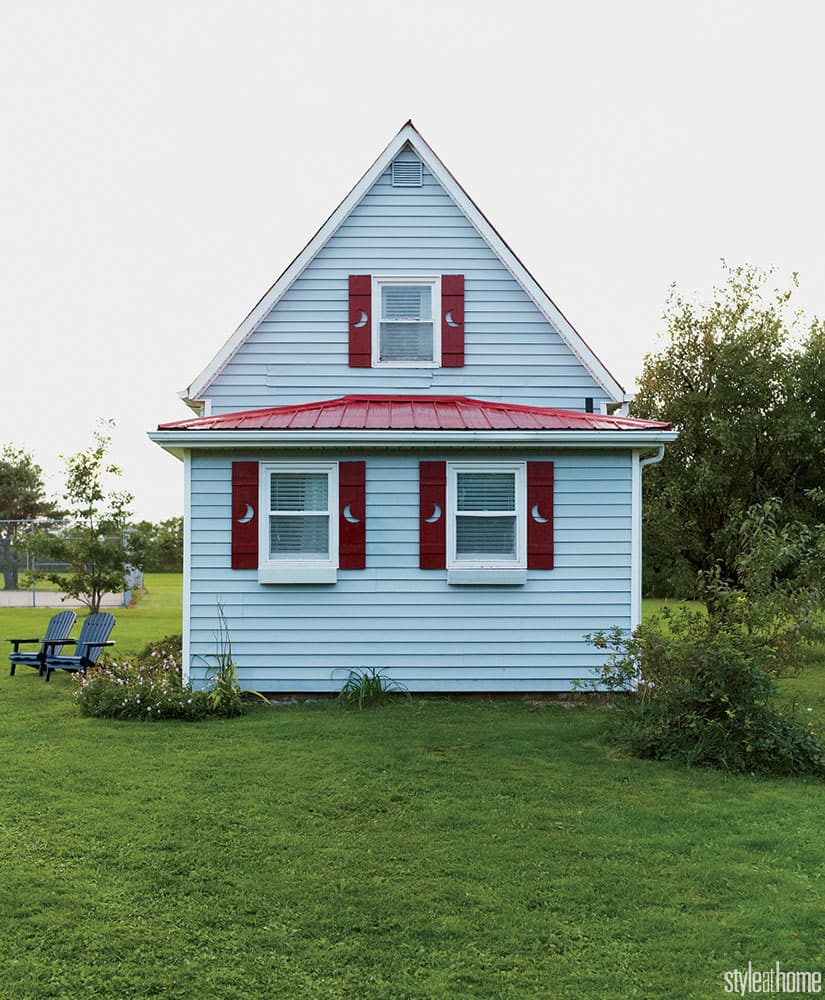 The cottage’s charming exterior, complete with red roof and shutters, was irresistible to Kevin and his wife. 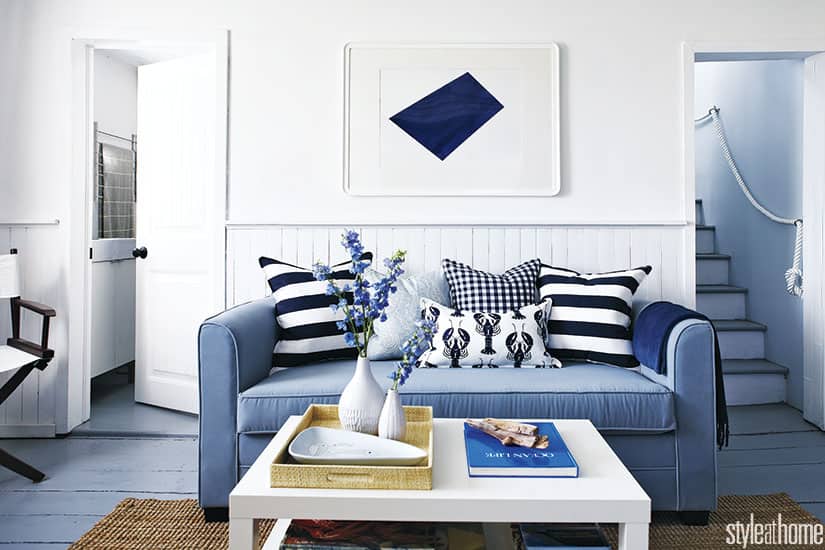 Should extra guests stay the night at this cozy cottage, the sofa in the living room pulls out into a bed. The wainscotting adds a homey nautical style, and reading lights mounted on the wall are a space-saving solution in the space. 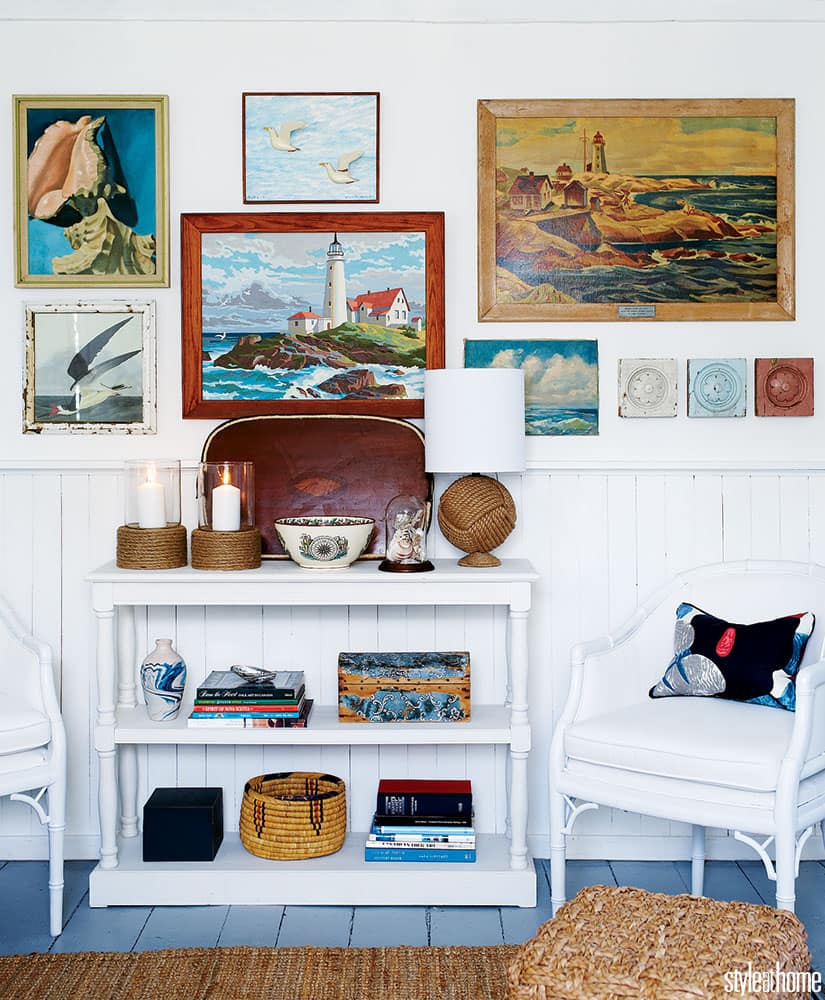 A mishmash of sea-themed pieces collected over the years pop against the white walls and furniture. “We painted the living room walls first because we wanted to get the art up as soon as possible to push us to get decorating. All the art was hung while the rest of the space was still a work zone,” says homeowner Kevin Austin. 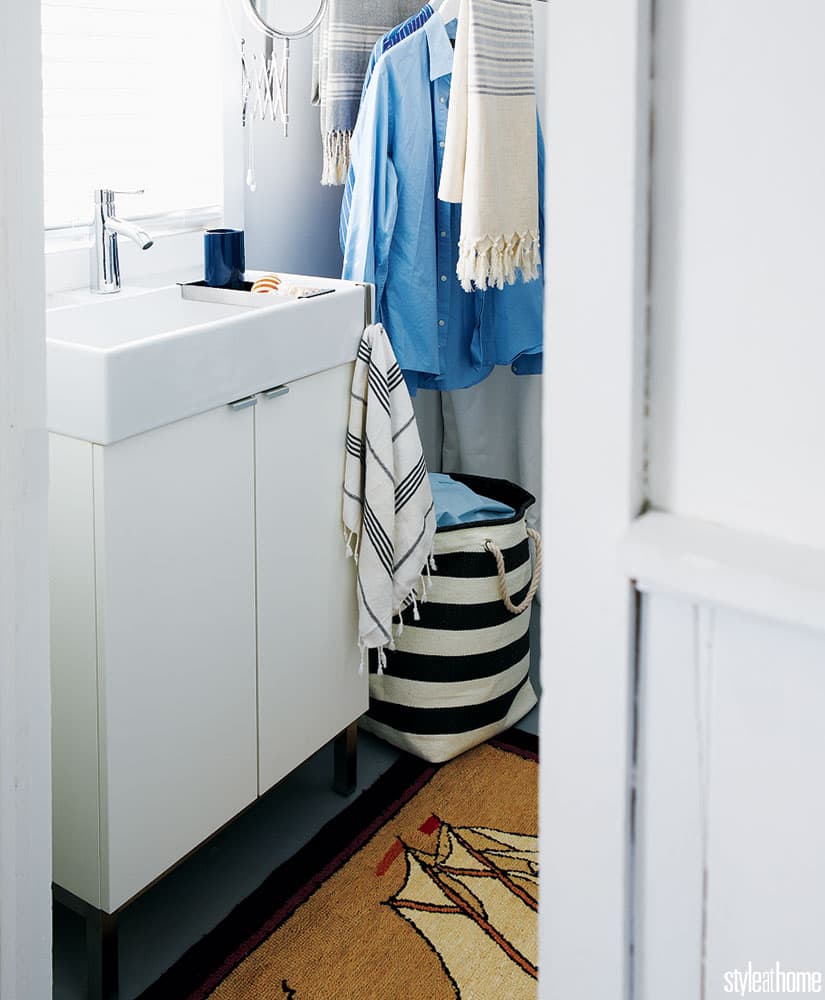 Blue and white stripes set the nautical tone in the maritime-themed bathroom. 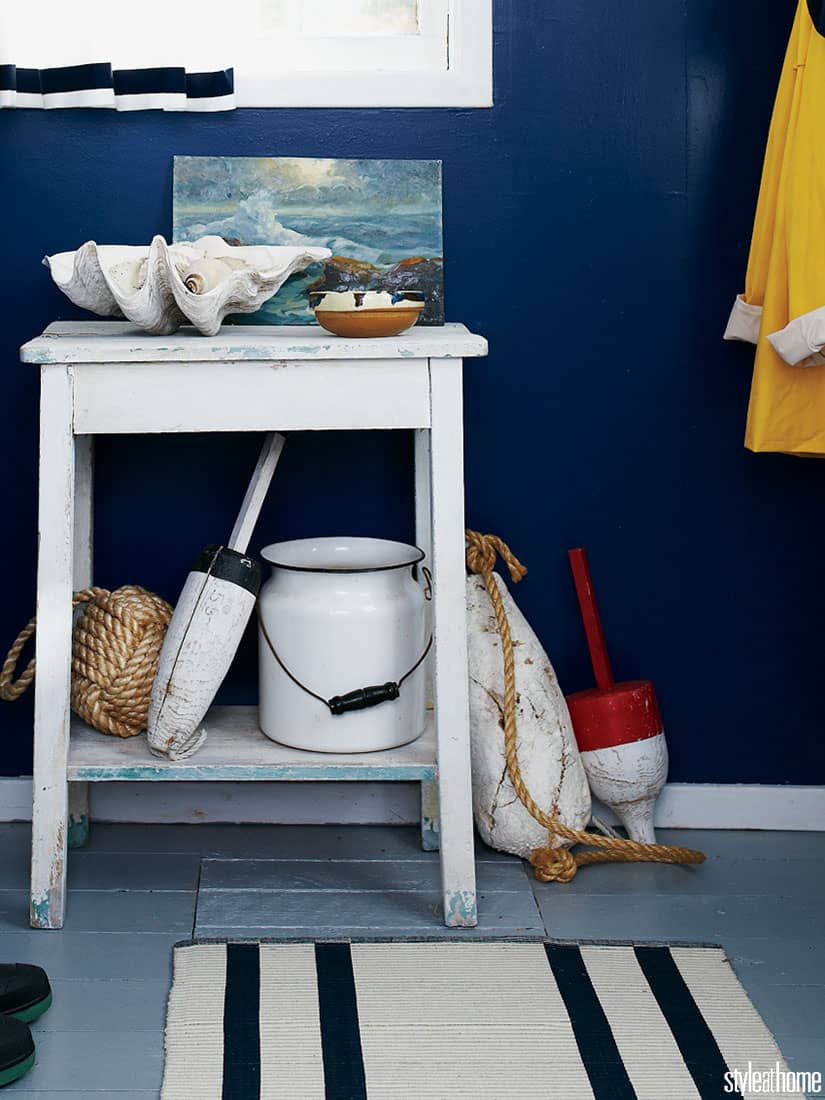 Deep blue cocoons the entryway, before the refreshing white unfolds inside. 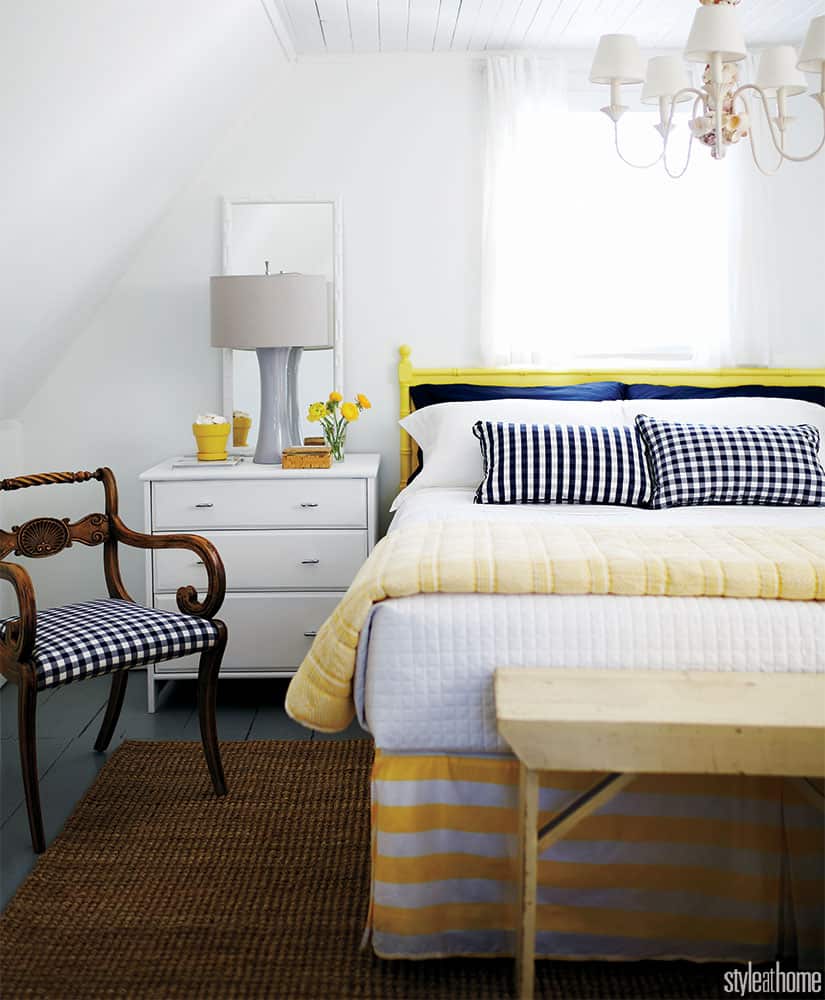 The headboard from an old resort was a local thrift shop find. It was painted yellow for fun," says Kevin. “Slick yellow, navy and white is a crisp preppy combination.” The Kate Spade striped bedskirt from Bed Bath & Beyond – a lucky score – was a perfect match. 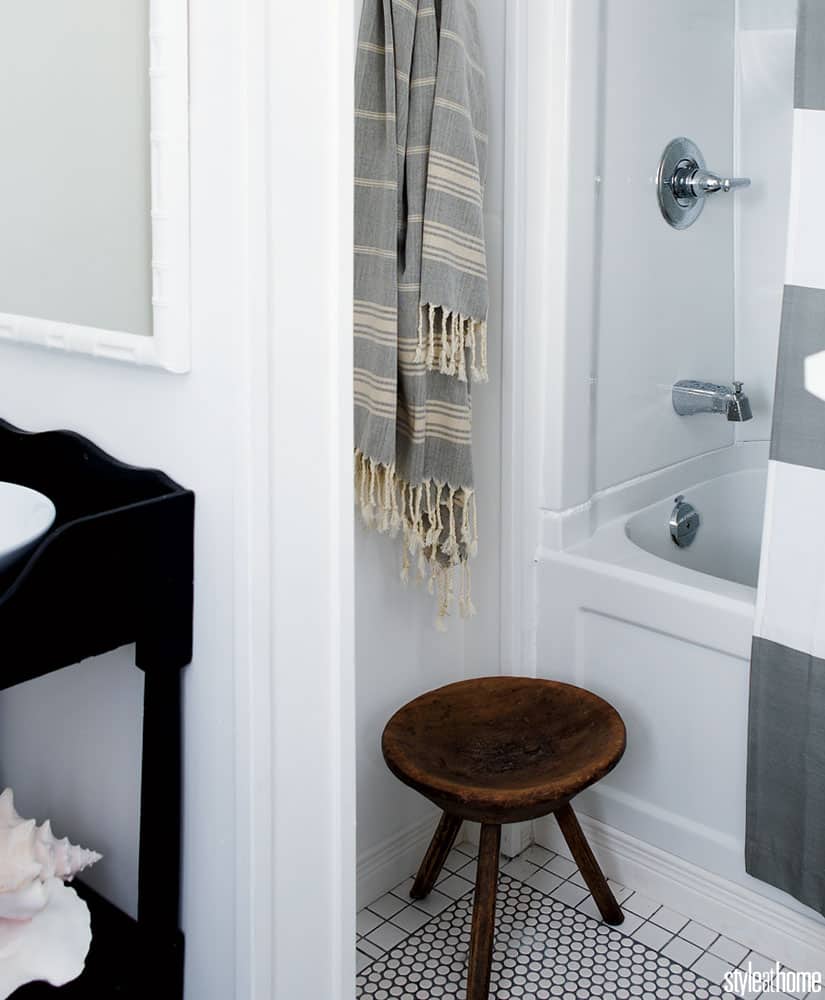 A primitive stool underscores the bathroom’s simple design and breaks up all the white. The penny round tile pattern inset in the floor and the striped shower curtain add pizzazz. 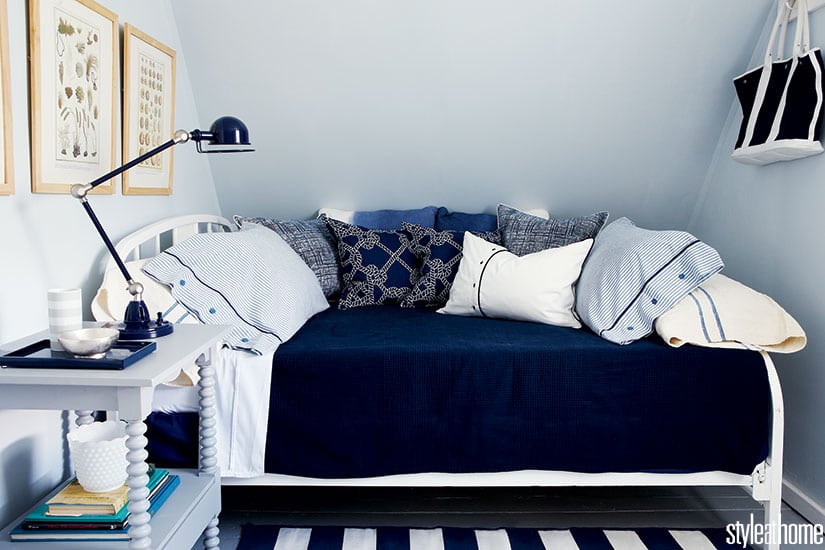 Layers of blue in the upstairs guest room continue the colour scheme, while a dappled milk glass vase and spooledleg side table used as a nightstand add texture. 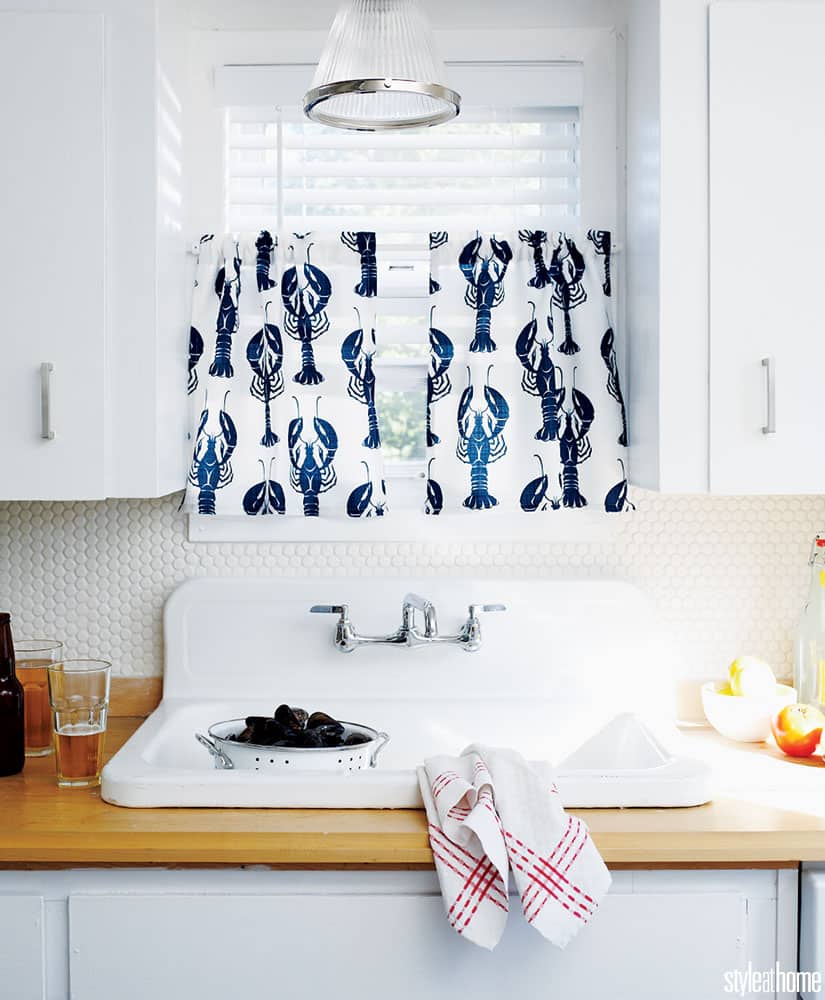 The lobster curtains in the chic nautical kitchen were sewn by Kevin’s wife. Blue lobsters are a rare natural phenomenon and the couple considers them good luck. 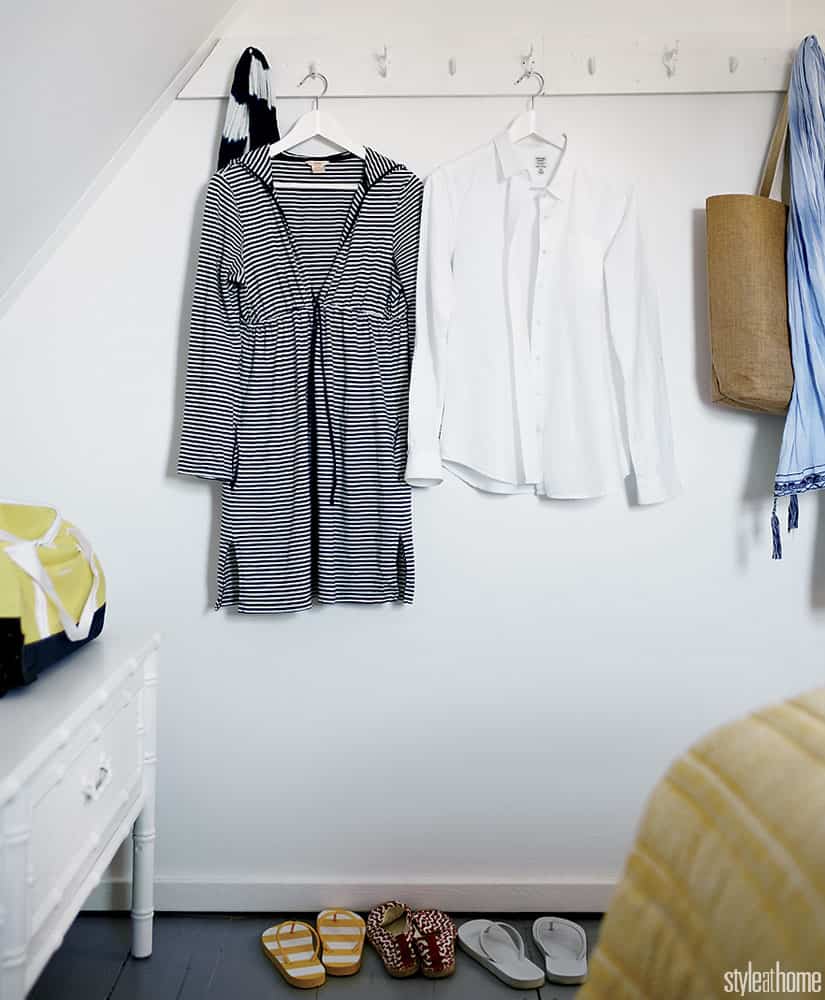 Hook racks are a casual and space-conscious storage solution in the master bedroom – they were also installed in the mud room and bathroom. 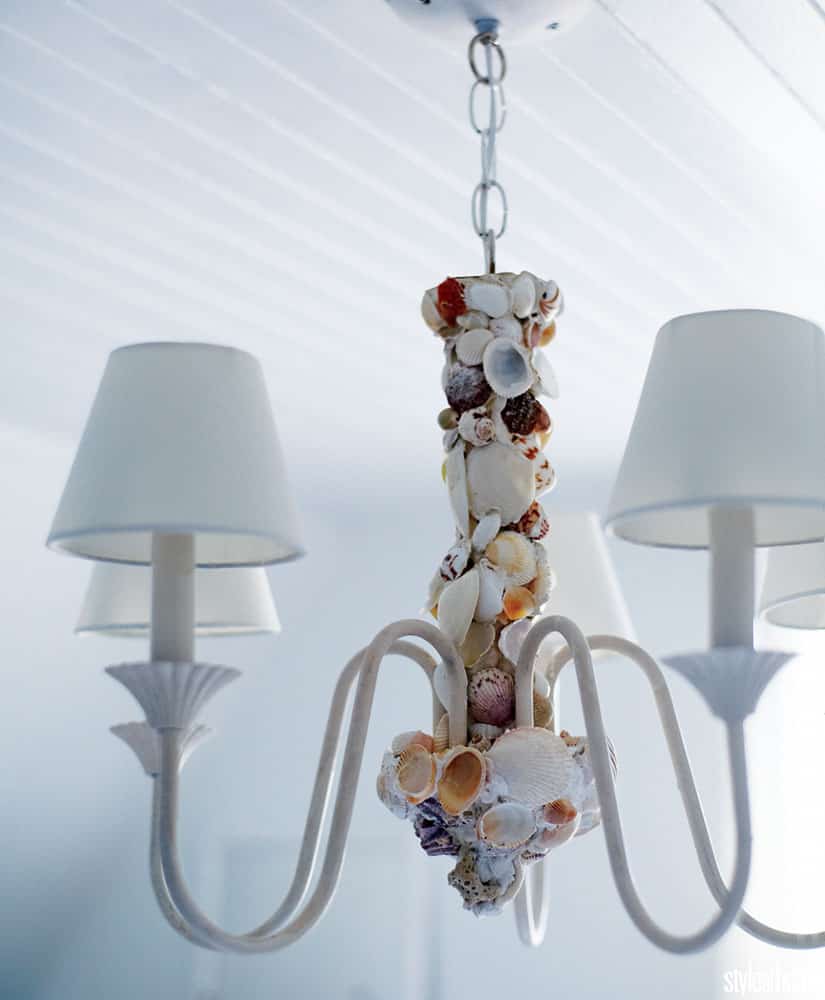 A stunning chandelier in the master bedroom sports a collection of seashells. 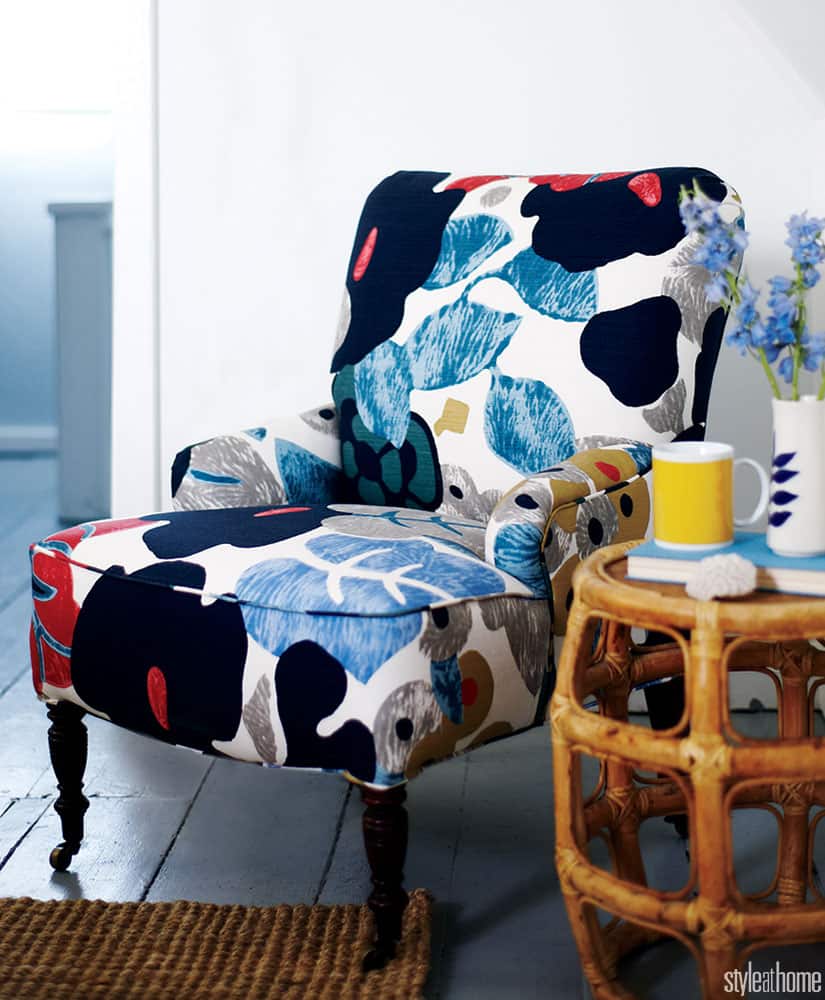 Plucked from a thrift shop for $10, the slipper chair was upholstered in a bold designer fabric that contained the cottage’s colour palette (“It’s a great way to tie the whole scheme together, and it’s a showstopper against the white wall,” says Kevin). 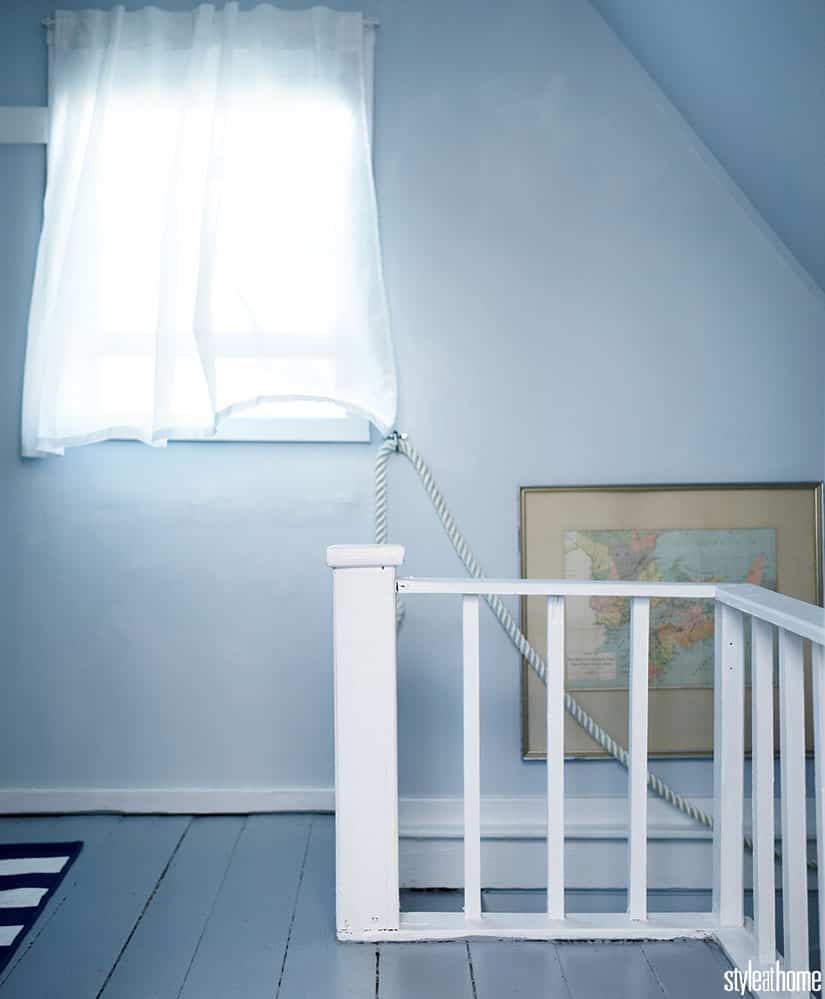 The soft blue-grey modern preppy shades set off the crisp white trim in the hallway – the nautical notes are continued with the sisal rope banister.