In the heat of summer, we look back at how a snowstorm led a couple to their dream home.

While many people think blizzards are absolutely apocalyptic, Fredericton homeowners Jenna and Steve Holland see them as a positive omen. Jenna, a kindergarten teacher with an eye for interior design, and Steve, a contractor who runs Holland Home Renovations, have purchased, updated and flipped several houses – “and we always seem to buy homes on stormy days,” says Steve. This one, which they ended up keeping for themselves, was no exception.

The couple weren’t necessarily looking to move when they stumbled across the 2,100-square-foot four-bedroom abode two years ago. “We were newlyweds sharing a three-unit house – living upstairs while renting out the two basement apartments – when one day we got a call from a real estate agent friend about a place that had just come on the market,” says Jenna. (Yes, it was snowing outside.) Feeling bored and hemmed in by the weather, they went to check out the house as a potential flipping project.

But when they saw the property, they were enthralled by the house’s Mid-Century Modern vibe. Intriguing architectural features included vaulted ceilings with exposed beams, two wood-burning fireplaces, hardwood floors and large windows. “It had good structural lines and great potential,” says Steve.

It was an exceptional find in this city, which boasts a pedigree of turn-of-the-century Victorian and Craftsman-style homes. “There’s not much like this in Fredericton,” says Steve. “You don’t see a whole lot of Mid-Century-style architecture here.”

The lot was also a big draw. Located in a family-oriented neighbourhood, the yard backs onto a farm, offering a bucolic setting that’s conveniently close to the downtown core. Recognizing they could make the house great but that it required too much work for a flip, the couple decided, on the spot, to keep it for themselves. They put in an offer and purchased the house within a few days.

The pair later discovered the house had an intriguing history: Built in 1965, it was a West Coast design that had been adapted for the East. “The original owner, who was an engineer, was going to have it built out West,” says Jenna. “But then he got a job at the university here and decided to stay, so he had to modify the drawings to suit our colder winters.”

Their respect for the history of the house never waned throughout the renovation, which began on the main floor as soon as they took possession. Collaborating with interior designer Mallory Lennon of Reimagine Designs, the couple created a modern open-concept space while retaining and updating key original elements to preserve the Mid-Century personality they love. The brick fireplace, for instance, was a head-scratcher. They discussed resurfacing the whole thing, but to save money and preserve the history, the couple ended up painting it white and flanking it with firewood storage and an intriguing wood-slat wall for the TV.

In fact, wood is incorporated throughout the predominantly white envelope to keep the space from feeling too stark and to complement the Douglas fir beams. The kitchen’s high-gloss white cabinetry was paired with an island made of grey faux walnut, the entryway was panelled with pine, and the white oak floors were stained a rich dark walnut to add contrast and a grounding warmth.

For these consummate renovators, the house has served as a labour of love and a place they can settle into. “We see ourselves growing as a family here,” says Jenna. “Until, of course, the next snowy day!” We can’t wait to see what beauty the next storm brings. 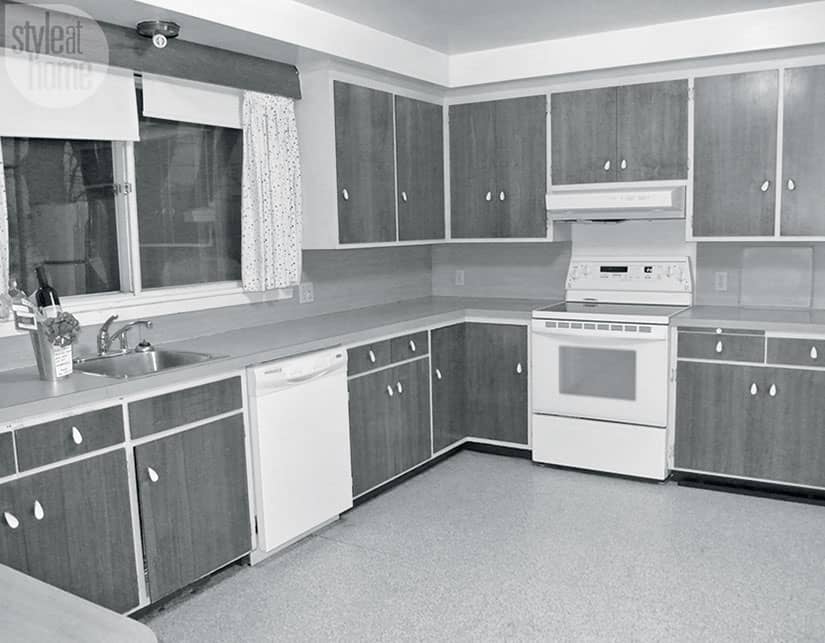 In this Mid-Century-style Fredericton home, three walls came down to open up the entryway, dining, living and kitchen areas on the main floor. 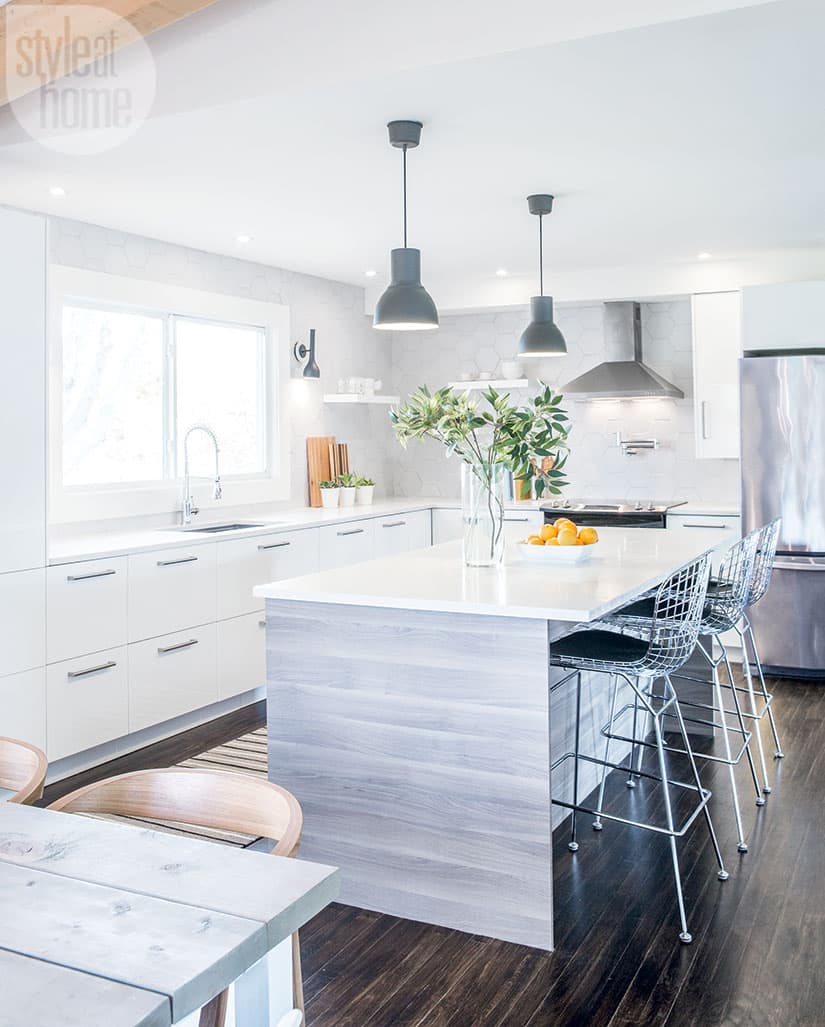 The kitchen's new white colour scheme, with contrasting hits of black, grey and brown (via the wood tones), enhances the brightness of the space. 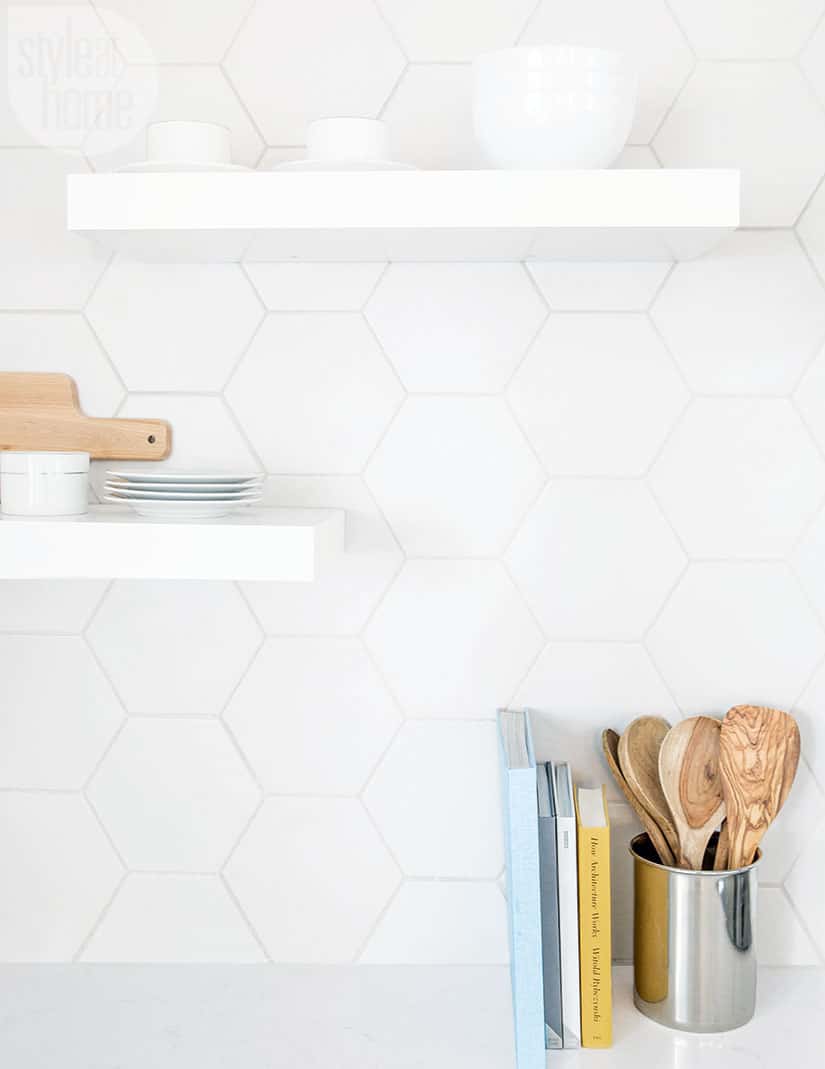 The white shelves, countertops, and backsplash are awakened with wooden kitchen essentials and a few books in hues that reflect the colourscheme throughout the home. 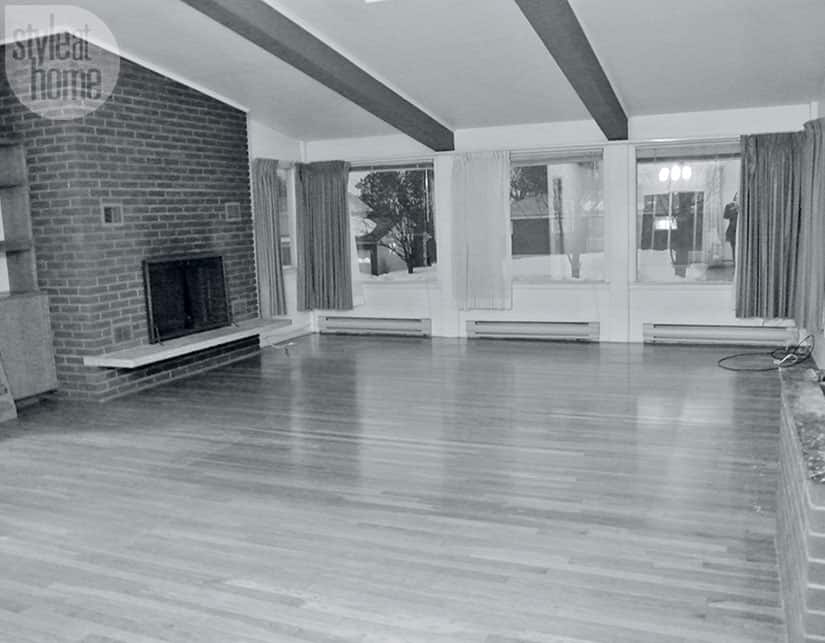 The brick fireplace was painted white, and its original Mid-Century-style granite hearth was maintained. 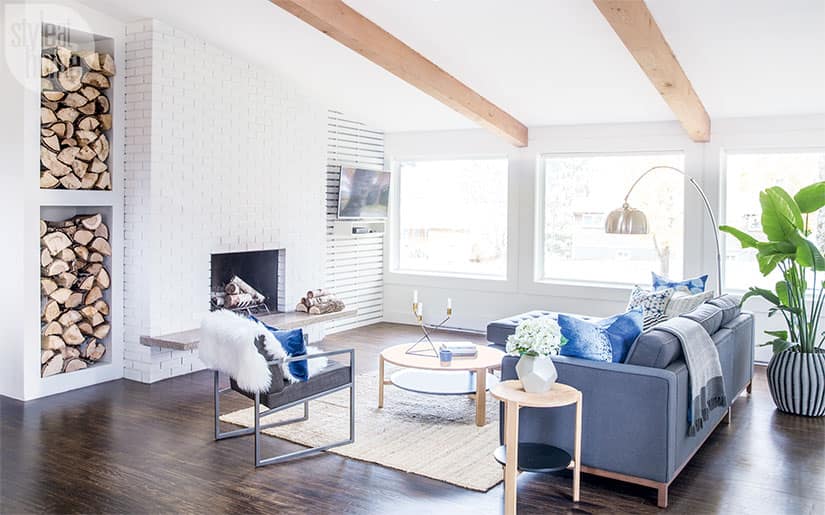 The built-in wood storage is both practical and decorative. To complete the look, homeowners Jenna and Steve Holland covered up a window and built a wood-slat wall to mount the TV on. “[Designer] Mallory [Lennon] was quite adamant that we didn’t hang the TV above the fireplace,” says Steve, “and this [new wall] allowed us to position it without making it a focal point.” 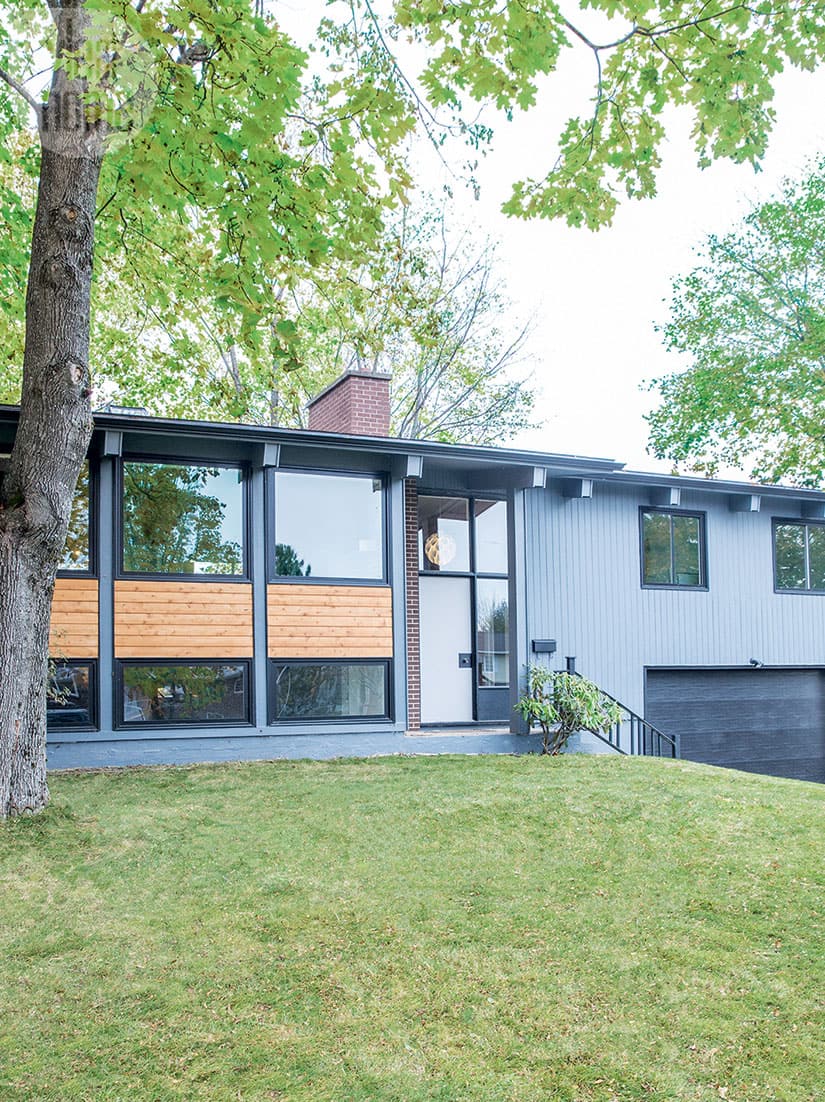 The house’s exterior was transformed with a rich slate-grey paint colour, new black-framed windows and cedar accents. “We nicknamed the house Project Blueberry because everything had been painted in two shades of blue – including the shutters. It didn’t do the house justice,” says Jenna. “Now it has a more up-to-date feel.” 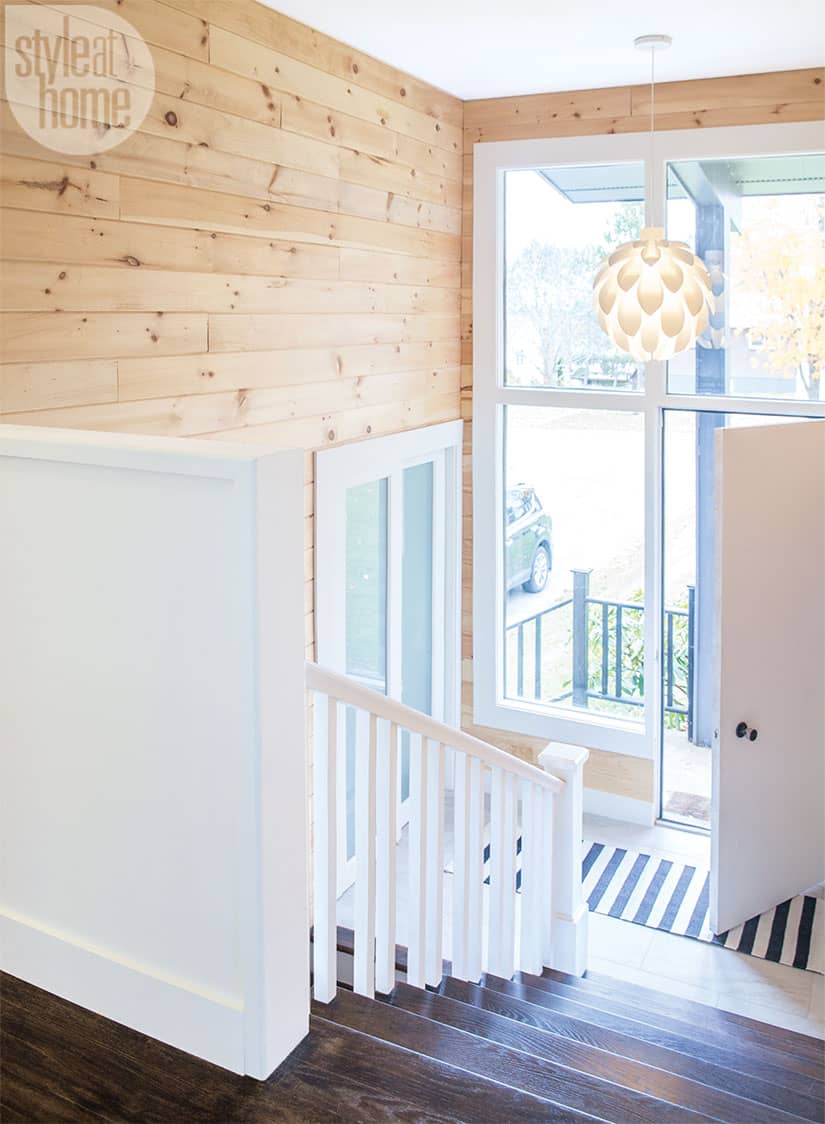 In the entryway, orangey stained wood wainscotting was ripped out and replaced with floor-to-ceiling pine tongue-and-groove panelling. The space was accented with a Mid-Century-style pendant light for a modern-country Scandinavian feel. 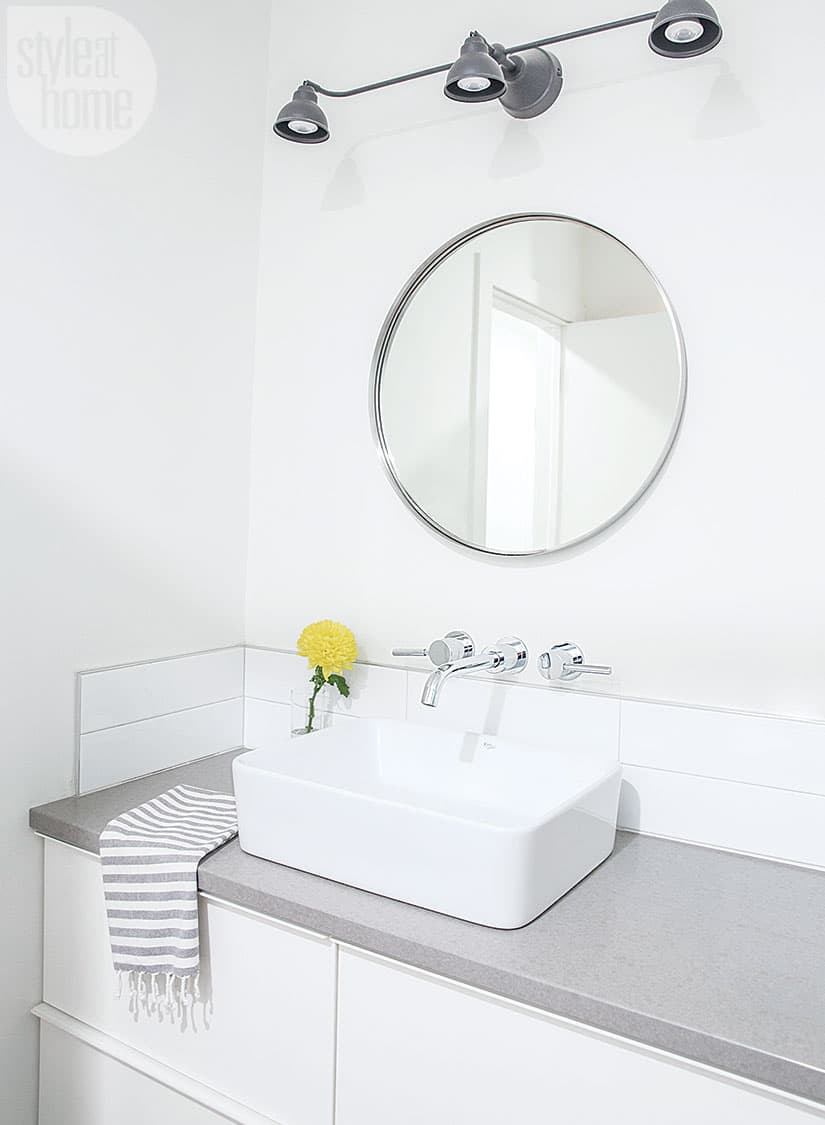 Jenna and Steve continued the house’s clean-lined unfussy aesthetic in the main-floor bathroom, where a high-gloss white floating vanity with a vessel sink and wall-mounted faucet look sleek and understated. Grey-toned elements like the industrial-look sconce and quartz countertop offer contrast to the clean white and tie in with the palette used throughout the main living space.